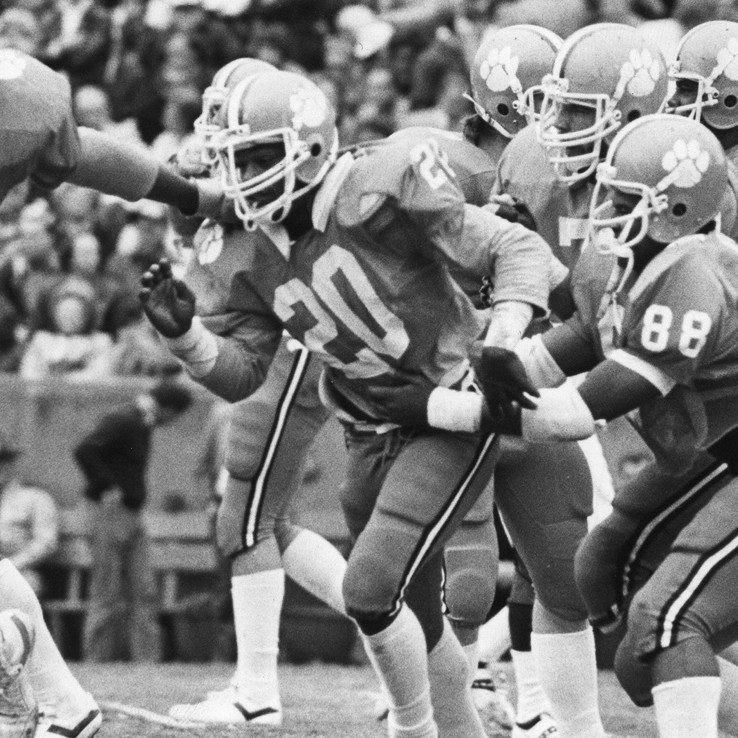 Debut of the Orange Pants

Editor’s note: This is the third in a series of the most memorable games in the history of Memorial Stadium, which is celebrating 75 years this season.

Danny Ford was searching for something to spark his football team. Prior to the 1980 season, Ford had his team manager order a special set of uniform pants for the Tigers to wear against arch-rival South Carolina in the regular-season finale. Ford wasn’t sure how he was going to introduce the pants to the team or if the players would even wear them that year.

But after falling to Maryland 34-7 the week before the Palmetto State’s big game, Ford knew it was time to break out these so-called special pants. It was either now or never.

Entering that year’s South Carolina game, Ford found himself in a pinch. After losing the last two games in 1979, and then falling to 5-5 through the first 10 games in 1980, Clemson fans became restless and some were calling for Ford’s job.

“It did not look good for us that week,” admitted Ford.

It looked even worse with No. 14 South Carolina coming to town. The Gamecocks were already Gator Bowl bound and featured the best running game in the country thanks to running back George Rogers, who went on to win the Heisman Trophy.

Ford called his two defensive leaders, cornerback Willie Underwood and linebacker Jeff Davis, into his office before a practice that week. That is when the former Alabama player pulled out a pair of burnt-orange pants. The pants took Underwood and Davis back a second, but they agreed to wear them.

Ford asked that Underwood and Davis keep it quiet, because he was going to surprise the players after the team meal the Friday night before the game.

“We knew something was up, but we didn’t really know what,” said running back Cliff Austin.

When Friday night dinner was done, Ford came up front, where he said a few words about the game, and then reached down and held up the orange pants.

“This is what we are wearing tomorrow,” said Ford.

“When he did that, the room went crazy,” recalled Davis. “That’s all the guys could talk about was wearing those orange pants with the orange jersey and the orange helmet and how the fans were going to love it. Coach Ford was a master motivator. He knew how to push the right buttons.”

To surprise the fans, Ford asked his players to put their thigh pads in their orange pants and to wear their orange jerseys with their white pants for pregame warmups. With the thigh pads already in place, it would make the transition of changing the pants faster when they returned to the lockerroom.

When the fans saw the Tigers gather at Howard’s Rock dressed in all orange for the first time, the sellout crowd of 64,000 fans in Death Valley got extremely loud.

“When the fans saw us, they went absolutely crazy,” stated Davis. “We knew we were going to win.”

However, it did not appear as if Clemson was going to win late in the third quarter when the Gamecocks drove the ball to the Tiger 16. They were in position to take their first lead of the day. But with 32 seconds remaining in the third quarter, Underwood stepped in front of a Garry Harper pass and raced 64 yards down the sideline before stepping out of bounds at the Gamecock 24.

Six plays later, Homer Jordan called his own number from the one, and the Tigers took a 13-6 lead.

Though Rogers carried the ball 28 times for 168 yards, Clemson kept him out of the endzone. Rogers never scored in four games against the Tigers.

“Our goal was to keep him from breaking the ball outside and make someone else beat us,” said Davis.

There was no one else.

On South Carolina’s next possession, Harper again tried to go outside with a pass, but the pass was again cut off by Underwood, who this time made sure he did not step out of bounds. The senior raced 37 yards down the sideline to give Clemson a 20-6 lead.

The two interceptions were the first of Underwood’s’ career, a span of 47 games.

Later on, the Tigers got a 15-yard Jeff McCall touchdown to end the scoring in the 27-6 victory. Underwood finished the game with 101 interception return yards, which is still a school record. He also registered 17 tackles and was named national player-of-the-week by Sports Illustrated.

The win over the Gamecocks lifted Clemson to its perfect run in 1981, which ended with a 22-15 victory over Nebraska in the 1982 Orange Bowl, sealing the Tigers’ first national title.

Clemson went on to post a 16-2 record under Ford when wearing orange pants.