CLEMSON, S.C. — Proving to be the “Cardiac Cats” yet again, the Clemson University men’s basketball team knocked off the No. 6 Florida State Seminoles 70-69 on a game-winning layup with one second remaining. Al-Amir Dawes drove the length of the floor for the go-ahead basket, coming up clutch and providing the Tigers with their third victory of the season over a top-10 opponent at Littlejohn Coliseum.

Clemson (15-13, 9-9) made 48.2 percent of its shots on the afternoon, and Florida State (24-5, 14-4) recorded a shooting percentage of 50. The Tigers connected on six 3-pointers and tallied an impressive 40 points of the paint. The Seminoles benefited from 24 bench points but committed 16 turnovers, which led to 23 Clemson points. Also of note, the Tigers drew six charges, the most drawn by a Clemson team since the 1986-87 squad drew seven in a game.

Dawes continued with his recent string of success by scoring 18 points on 8-of-18 shooting to go along with his four assists. John Newman III also scored 18 points, going 6-for-13 from the floor and 5-for-6 at the free throw line. Tevin Mack tabbed nine points and five boards, surpassing the 400-rebound mark for his career. Aamir Simms corralled a team-high eight rebounds. Florida State’s Devin Vassell registered 14 points and seven rebounds.

The Tigers were braced by Dawes in the first half, as the floor general consistently drove the basket and scored 13 points on 6-of-12 shooting. The Seminoles sported a 39-32 lead at halftime and led by as many as 10 points early in the second half. Clemson clawed back with a 7-0 run that was capped off by a thunderous dunk from Newman out of the fast break. Furthermore, the Tigers were able to erase their deficit by holding the Seminoles without a field goal for 8:55 of play in the second half.

Taking their first lead since the early goings, the Tigers went up 46-45 on a layup by Newman with 13:35 left, setting the stage for a back-and-forth duel the rest of the way. Mack swished a go-ahead 3-ball with 1:43 on the game clock that placed Clemson up 65-63. With under 10 seconds remaining, Florida State took a 69-68 lead on a jumper in the paint, but Dawes responded by racing to the other end of the court and making a contested layup with just one second left. Once the final buzzer sounded in the 70-69 Clemson victory, the raucous Littlejohn faithful stormed the court. The Tigers have defeated three top-6 opponents this season for the first time since the 1979-80 slate.

Clemson will take part in its final road contest of the regular season on Wednesday, March 4. The Tigers are set to head to Blacksburg, Va., for a matchup against Virginia Tech (15-13, 6-11). The Hokies defeated the Tigers 67-60 in the season opener at Littlejohn on Tuesday, Nov. 5. Wednesday’s game at Cassell Coliseum will tip off at 7 p.m. and air on ACC Network.

“We played really well. Defensively, in the second half, I thought we were very good and fought very hard. In the first part of the game, we had trouble guarding [Florida State]. Offensively, we did about as well as we could against them. We mixed in some things that we’re comfortable with. Al-Amir [Dawes] was terrific at different parts of the game. On the play at the end of the game, we just decided to let him go and see what would happen. I was just screaming to go to the basket, and he went in there and made an unbelievable play. I’m extremely proud of our guys.”

“Florida State is tough to score against. This was a terrific team win with different guys making different plays for our team throughout. I’m really proud of our guys for bouncing back. I can’t thank the crowd enough. Obviously, our fans make a huge difference. We mixed in some things in the second half. We threw it to high post and played through Aamir [Simms] some. I thought we showed good offensive poise today against a really hard team to play against.”

“I was happy to see Khavon [Moore] play like that. He shot-faked and used the rim. We talk all the time with our players about making layups. It’s not easy at this level. Al-Amir’s layup at the end wasn’t an easy layup. It sounds simple, but getting layups and preventing layups makes a huge difference in a basketball game. John Newman [III] was fantastic again. He showed flashes of brilliance and athleticism. Alex [Hemenway] came in and made a big shot and did fine. Defensively, he did OK. He held his own for the most part. Again, this was a lot of guys playing well. Trey [Jemison] gave us seven good minutes. He was a big factor. There were big-time plays from a lot of our guys. This was a great team win.”

On the game-winning shot:

“It was a heart-beating moment. Our coach was like, ‘If they score the last shot, let’s focus on getting the ball out and making a play for the team.’ So, in my head, I was just going to get it and go, and the outcome would be the outcome. And that’s what happened.”

On the fan support at Littlejohn:

“They’re a big factor. It’s always a big factor to have that crowd every time you walk into a home game. That’s what you want to play for.”

“Everyone is telling me to be aggressive and just be myself, and that was me listening to them today and trusting the work I’ve put in. They always tell me I put in too much work to not shoot the ball, so I shot the ball. I feel like we’re at our best when I do.”

On beating a high-ranked team:

“It’s a part of our maturity. We have to grow as a team and win the games we’re supposed to win, but when we come here, I think we have more juice and excitement when we’re playing these top teams. I think it shows.”

Florida State Head Coach Leonard Hamilton
Opening statement:
“I thought Coach Brownell had a great game plan, exploiting our inability to contain the dribble. We might be the No. 1 free throw shooting team in the ACC, so it was discouraging to see us go 11-for-18. All in all, I thought [Clemson] did a very good job of taking advantage of our inability to contain the dribble. I thought they did a very good job on the defensive end of exploiting our guys’ inability to make good decisions when driving the basketball. I think they had seven or eight charges. I’m not sure that I’ve ever been in a game in my life where a team had that many charges. I thought it was an excellent defensive plan by them.”

On the keys to the game:
“Clemson jammed the lane, and our guys didn’t recognize that. Those two things made the difference in the game. We were very fortunate to have a 1-point lead with six seconds on the clock. The thing that hurt us once again was [Clemson’s] offense having the courage and focus to go the length of the floor in six seconds and score the winning basket. Congratulations to Clemson for an outstanding game. Those guys really did a great job, especially in the second half.”

On not taking control of the game in the second half:
“The game has ebbs and flows. I think we might have missed three 3-point play layups in that stretch. When you’re on the road against a team that’s hungry for a victory, turn the ball over 16 times and go 11-for-18 from the free throw line, that’s a recipe for disaster. And that’s what happened today.”

ANOTHER TOP-10 TEAM GOES DOWN IN LITTLEJOHN!!! pic.twitter.com/jr8VwP5r7k

Dawes' layup with 1.0 seconds left gives us our 3rd win over a top-ten team this season!! pic.twitter.com/eYxZk6UI4K 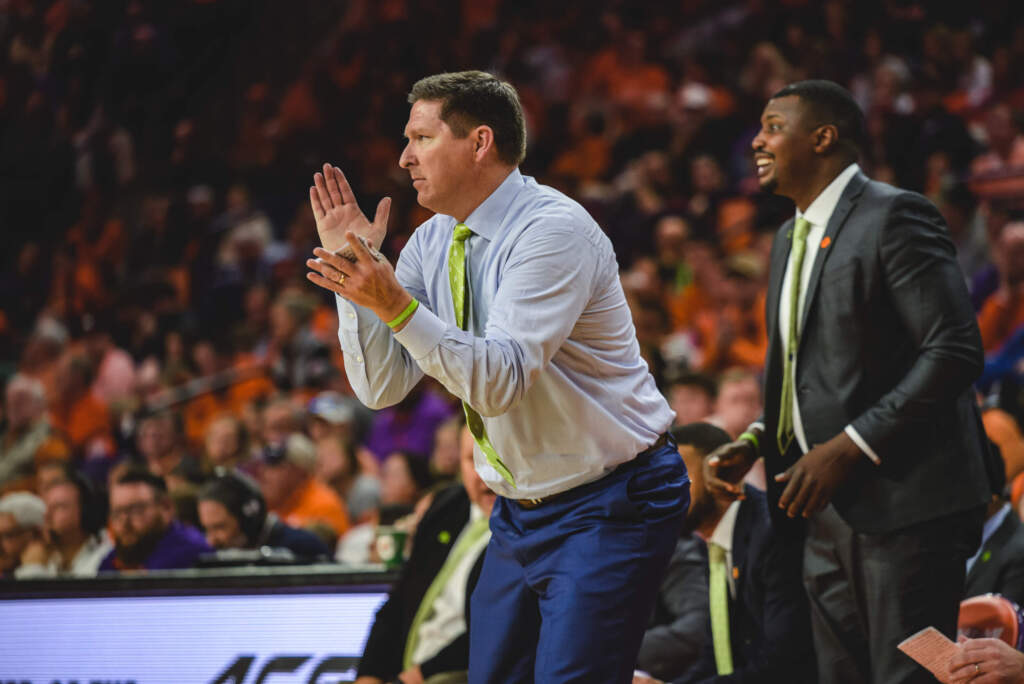 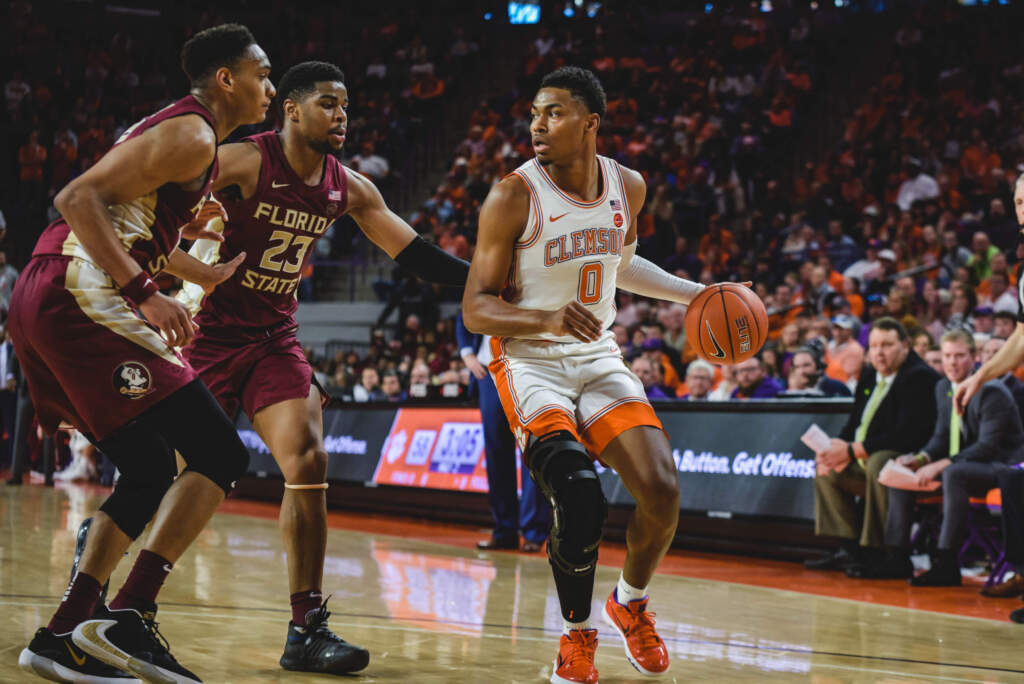 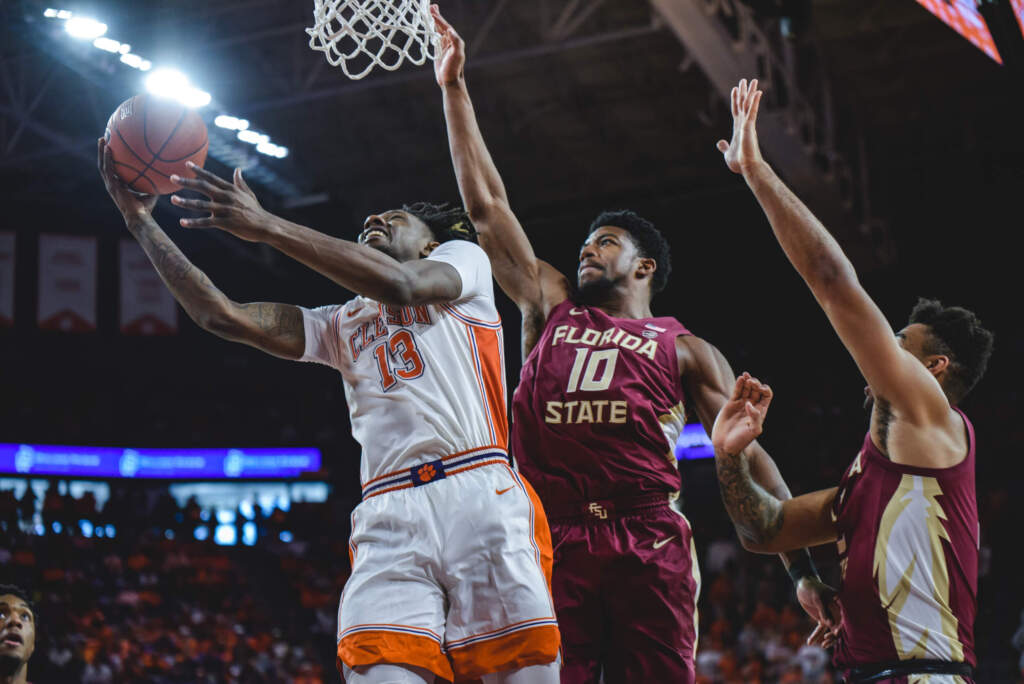 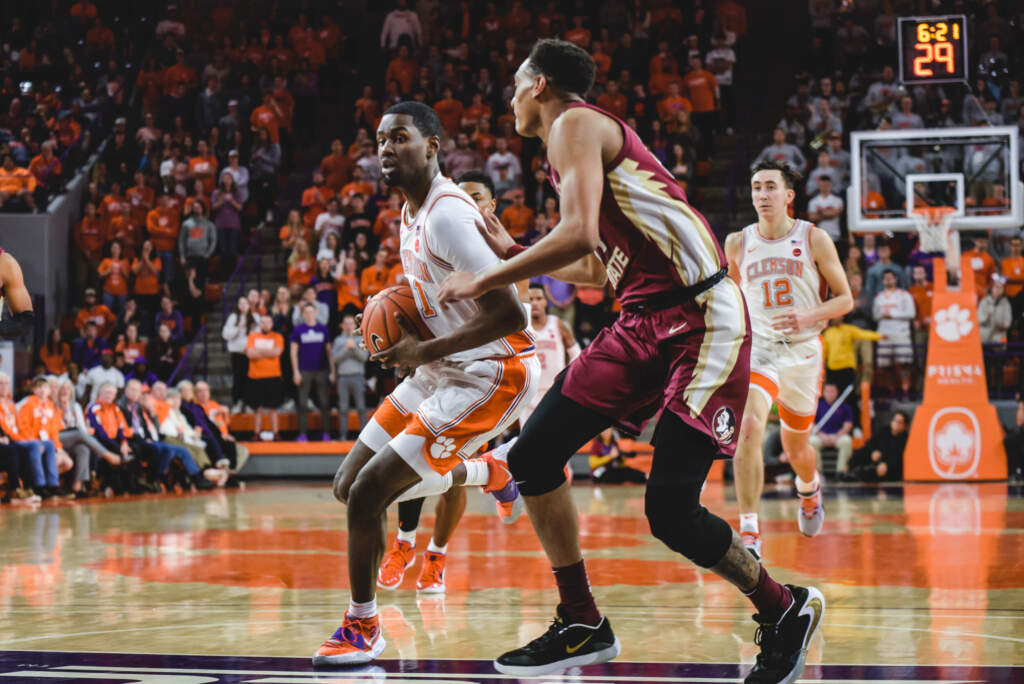 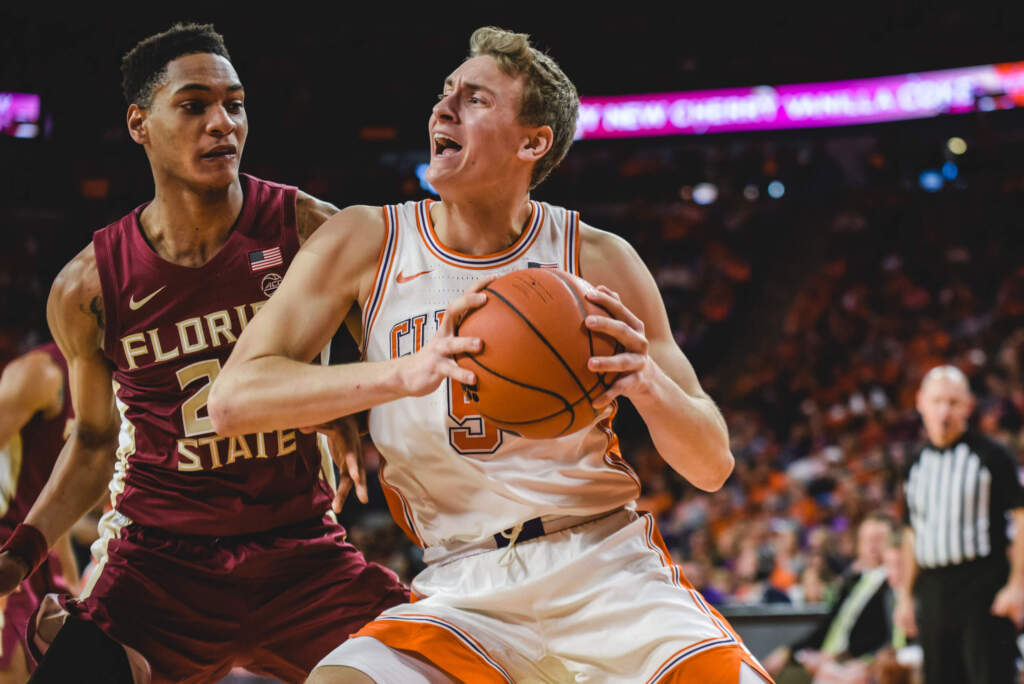 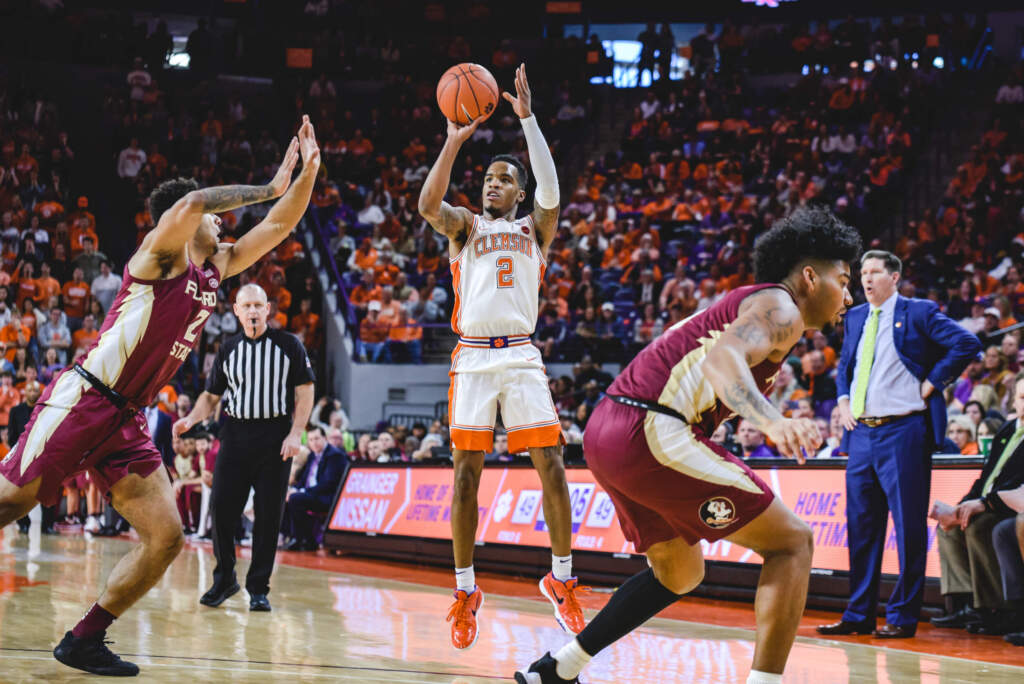 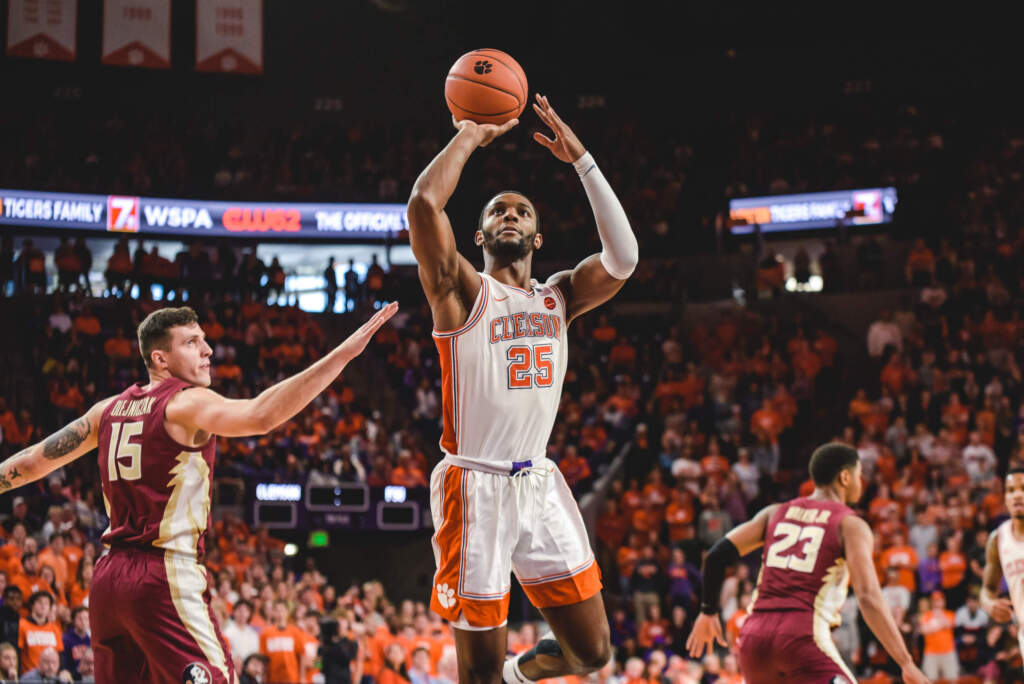 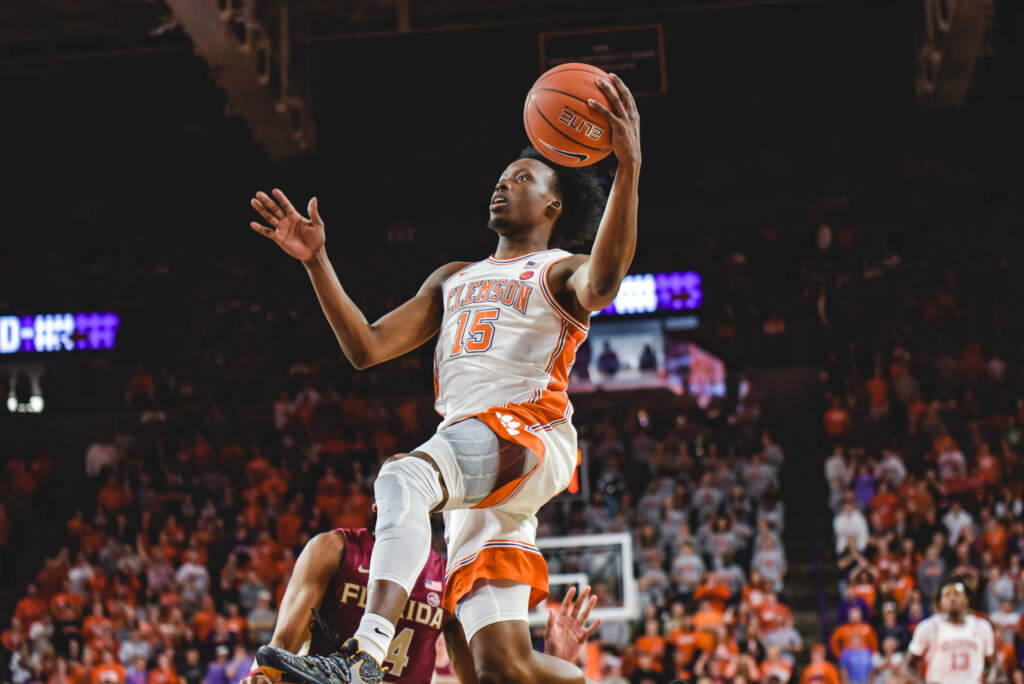 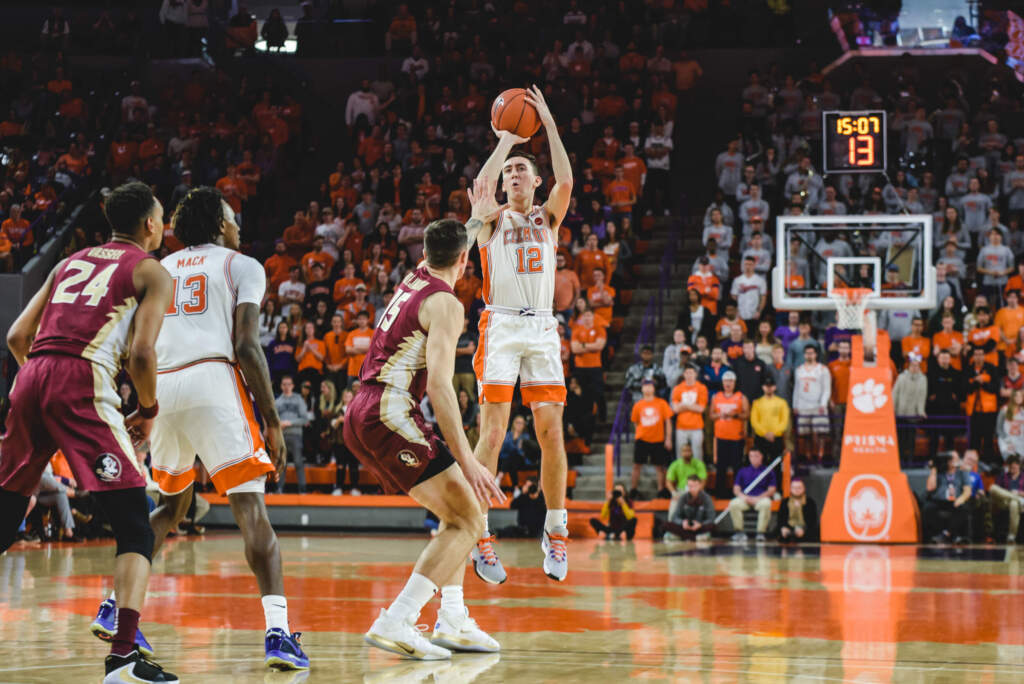 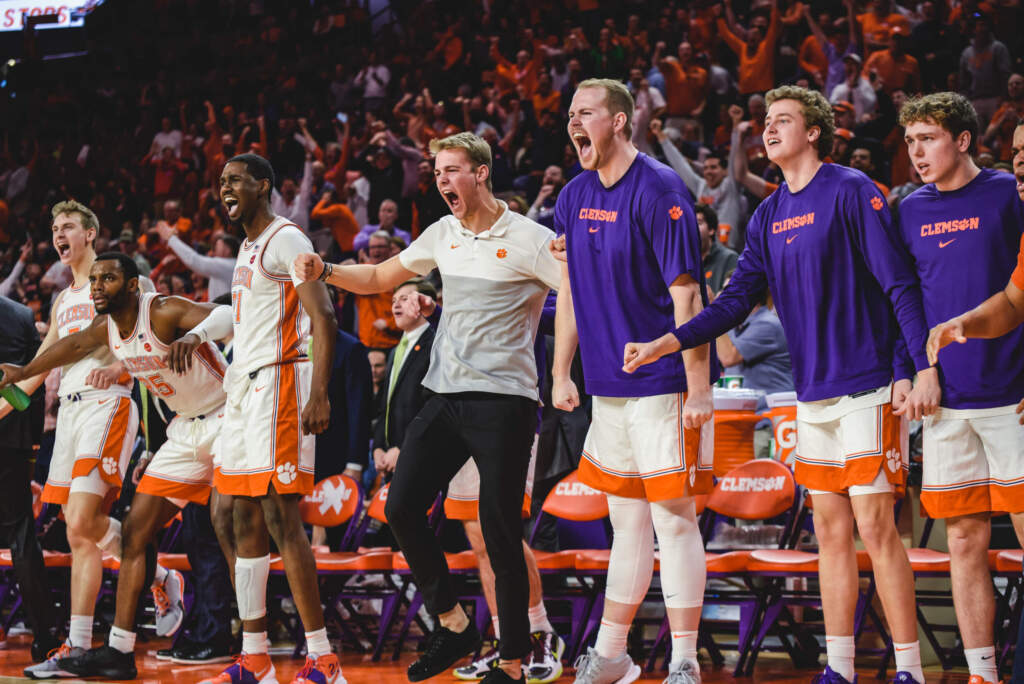