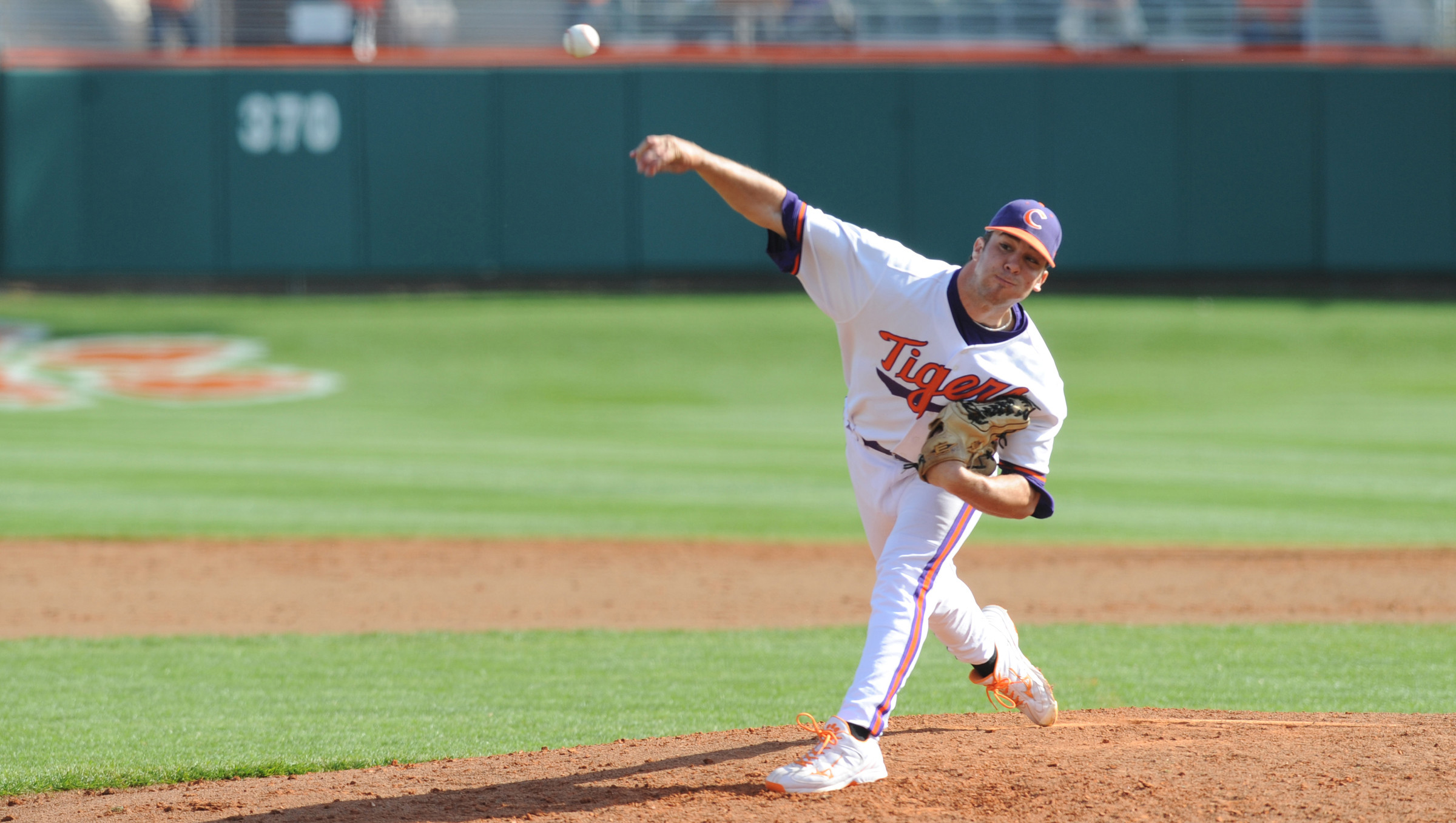 Matthew Crownover and Matt Campbell combined to pitch a four-hit shutout in Clemson’s 1-0 victory over Boston College in front of 854 fans at a chilly and windy Commander Shea Field on Sunday afternoon.  The Tigers, who swept the series 3-0 and won their fifth game in a row, improved to 21-11 overall and 9-6 in the ACC.  The Eagles fell to 5-25 overall and 0-14 in ACC play.

The Tigers had scoring opportunities in the third and fifth innings before finally plating a lone run in the sixth inning.  That was all the offense Clemson would need, as Crownover and Campbell combined to allow only five batters to reach first base, three runners to reach second base, and none to reach third base.

Crownover (4-0) pitched a career-long 6.1 innings to earn the win.  He gave up four hits, no runs, and one walk with four strikeouts.  Campbell retired all eight batters he faced with three strikeouts to record his sixth save of the season.

Boston College starter Andrew Chin (1-7) suffered the loss, as he yielded six hits, one run, and two walks with five strikeouts in 5.1 innings pitched.  Three Eagle pitchers combined to allow only one of Clemson’s 14 baserunners to score.

In the first inning, Blake Butera reached on a one-out, infield single on a 1-2 pitch, then Tom Bourdon lined a single to left field.  Two batters later, Matt Pare laced a 1-2 pitch to left-center, but centerfield Tyler Slaton made a diving catch to save two runs.

Jay Baum reached as the leadoff batter of the third inning when first-baseman Travis Ferrick dropped the throw from short.  Mike Triller, who was making his first career start, lined a single to left field, then Slaton reached on a bunt single to load the bases with no outs.  But the next three Tigers were retired to keep Clemson off the scoreboard.

In the fifth inning, Baum led off with a walk on seven pitches and Triller laid a bunt back to the mound.  Chin threw to second, but Baum beat the throw.  Slaton advanced both runners with a sacrifice bunt, but Steve Wilkerson struck out and Garrett Boulware flied out to right to end the inning.

The Tigers finally broke through in the top of the sixth inning.  Steven Duggar grounded a one-out single up the middle and Tyler Krieger blooped a single to left-center.  Jon McGibbon followed with a single through the right side to score Duggar and advance Krieger to third.  After McGibbon moved to second on a wild pitch, Baum and Triller both struck out.

The Tigers squandered another scoring opportunity in the seventh inning.  Slaton led off with a single to center when Bourdon misjudged the liner.  Pinch-hitter Joe Costigan grounded a single through the right side on a hit-and-run to advance Slaton to third.  After Boulware fouled out, Shane Kennedy grounded into a 6-4-3 double play to end the inning.

Slaton went 3-for-3 with a walk to lead Clemson, who totaled nine hits in the game.  Krieger added two hits, while McGibbon had the game’s only RBI.

Clemson will travel to Cullowhee, NC to take on Western Carolina on Tuesday at 6:00 PM.