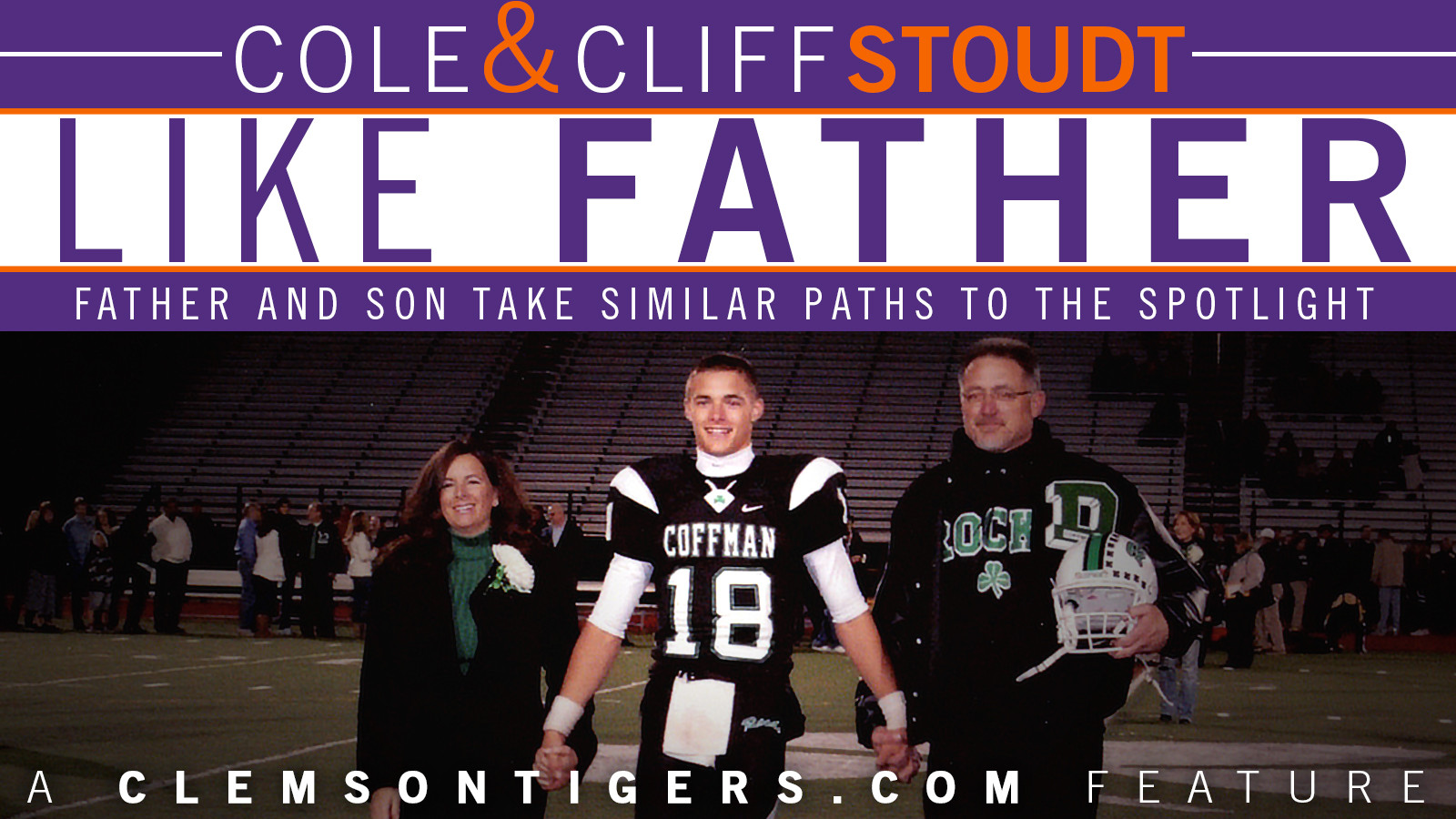 Dad can still fling it!

Cliff Stoudt played 15 years in the NFL, including seven with the Steelers, and has two Super Bowl Championship rings.  He also played two years in the USFL and six more years with the Phoenix Cardinals, Miami Dolphins and Dallas Cowboys.  He has kept in great shape, especially his right arm.

“Dad can probably still throw it 70 yards,” Cole said of his 59-year-old father.  “He still works out with me all the time.”

The workouts are a guiding light for the Clemson senior when it comes to work ethic, mechanics and game management.  “He gives me pointers with the little things, throwing mechanics, foot work, those types of things.  He played in the NFL for 15 years so he has seen it all.”

This is truly a special father-son relationship.  It has remained special because Cliff has always kept the sport in perspective.

“I never pushed football on either of my sons,” said Cliff, whose older son Zack played FBS football at Louisville and Mississippi.  “Cole only played one year before middle school and Zack didn’t play when he was a little kid.  I never pushed football, but there was always a football behind my chair, and if they wanted to go throw I was ready to go.”

As stated above, Cliff can give Cole pointers in the mechanics of the game, but he might have had a bigger impact from a mental standpoint.  Cole will finally get his chance as Clemson’s starting quarterback this year after three years backing up Tajh Boyd, whose 32 wins in 40 games are tied for the most by a starting quarterback in Clemson history.

Dealing with being the backup quarterback is something Cliff went through as well.  He was backup to four-time Super Bowl Champion Terry Bradshaw, the winningest quarterback in Steelers history, for six years, including four years in which he never played in a game.  But he finally got his chance in 1983, and led the Steelers to a 10-6 record and the playoffs.

“Part of my legacy I did not want to pass on,” said Cliff with a smile.  “Cole has been ready every week and that is what I had to do with Terry Bradshaw.  I finally got my chance in 1983 and made the most of it.

“Cole has gone through a similar situation, but has handled it well.  I know he has been prepared physically and mentally for every game.”

Cole confirms that his father’s experience has helped him.  “We talked about his situation in Pittsburgh and the importance of being ready.  You look at film, you study the opposing defense and you are ready to go when called on.”

Cole was ready as a freshman in 2011 when the Tigers met Boston College.  Early in the second half, Boyd went down with a hip injury and Stoudt came on to play the second half and help lead the Tigers to a 36-14 win over a Boston College team that featured Luke Keuchley, who went on to be the ACC Defensive Player of the Year that year and was the NFL Defensive Player of the Year in 2013.

He was ready this past year time and again. The Tiger offense did not miss a beat when he came into the game, and he completed 47-59 passes for 415 yards and five touchdowns with no interceptions.  His 79.7 completion percentage was the best in the nation among quarterbacks with at least 50 attempts and his 166.7 passing efficiency was just below Boyd’s 168.7 that was ranked ninth best in the nation.

“It sounds corny, but my chest stuck out and I had a smile from early to ear,” said Cliff.   “I teared up a bit.  Cole has worked hard from the time he started in middle school and earned everything he has gotten.  It was happiness and relief at the same time.”

“We were both so excited,” remembers Cole.   “He was reading all the articles and told me he was proud of me.  That meant a lot.”

While Cliff has taught Cole a lot about playing quarterback, one thing that has stuck with Cole is the importance of the position from a leadership standpoint.

“When I was a kid, my dad asked me, ‘When are you the quarterback?’  I gave him an answer that talked about a play in a game or at practice.

“He said, ‘no, you are a quarterback every where you go.’   He told me the importance of acting as a leader, setting an example all the time.  That is what a leader does.