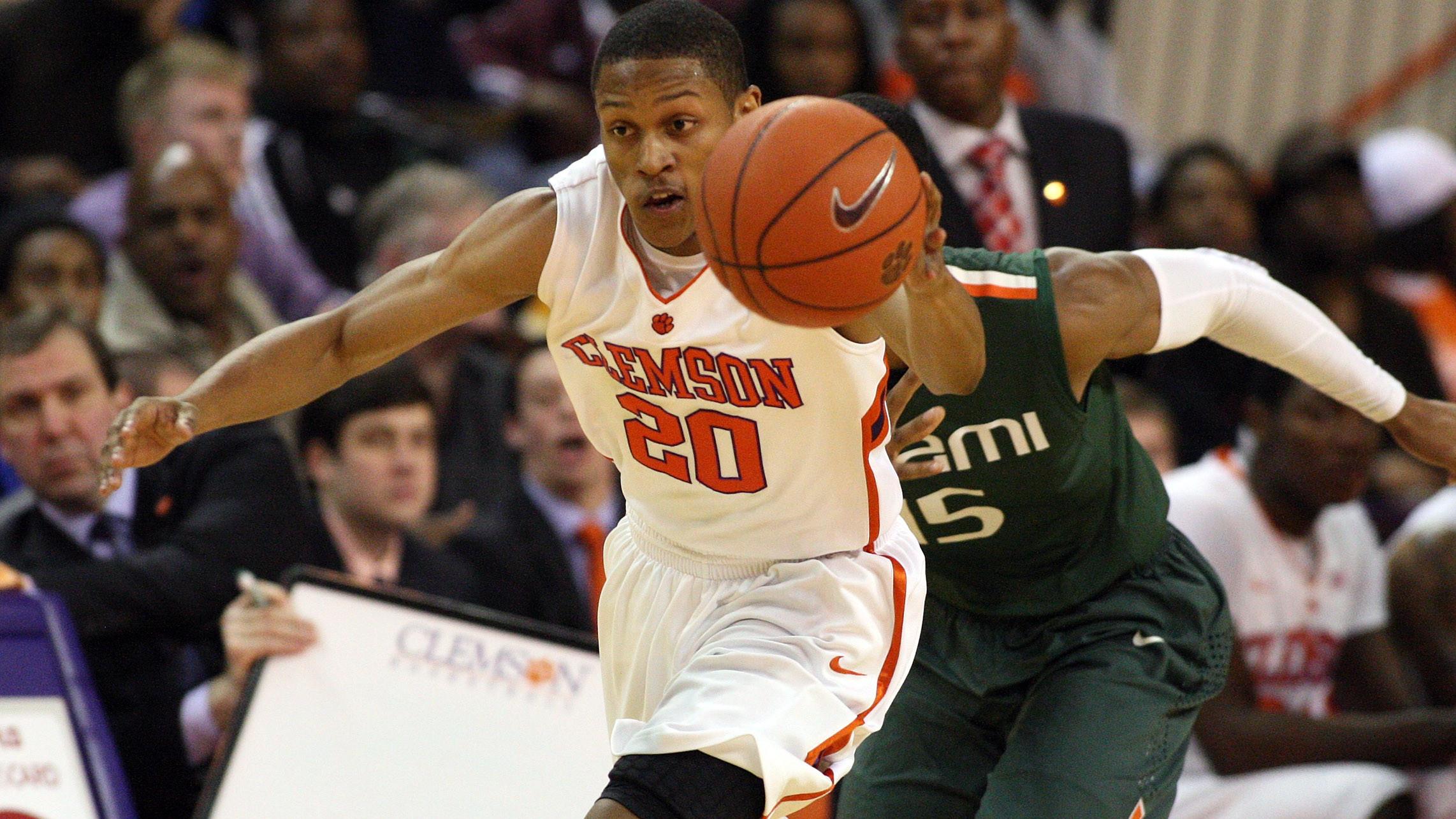 CLEMSON, SC – Clemson’s bid for an upset fell short on Sunday as the No.3 ranked Miami Hurricanes escaped with a 45-43 victory and a perfect 12-0 record in the Atlantic Coast Conference. The Tigers held a 42-38 lead after Jordan Roper‘s coast-to-coast layup with just under two minutes left, but were outscored 7-1 to end the game. Miami improved to 21-3 overall and 7-0 on the road in the ACC, while Clemson dropped to 13-12 (5-8 in the ACC).

Kenny Kadji made the go-ahead three-point shot with 34.7 seconds left, and Miami tacked on a free throw with 8.6 ticks to go. Clemson had the ball with a chance to tie, but the Tigers missed two attempts in close as time expired. Clemson held Miami to just 45 points, its lowest total this season. Its previous low was 50 against Indiana State in the Diamond Head Classic. The Tigers held the Hurricanes to a 34.6 percent field goal mark, but shot just 30.4 percent on their own. Clemson struggled to a 5-for-13 clip at the free throw line, just 38.5 percent. Miami won the rebound battle, 43-37.

Roper was terrific for a second straight home game for Clemson, leading all players with 19 points Sunday. The freshman made 8-of-11 overall, 3-of-4 from three-point distance. Devin Booker added a double-double with 11 points and 10 rebounds. Kadji led the Hurricanes with 12, while Julian Gamble added eight.

Clemson rebounded after Miami began the contest with an 8-2 lead, scoring five straight capped by a Roper steal and slam. Clemson took its first lead at 11-10 on a runner from Milton Jennings. The largest lead for the Tigers in the first half was 15-12 on a monster flush by Booker off a fast break. The two teams were tied at 16, but Miami took a two-point edge into the break off a Rion Brown jumper.

The Tigers came out strong after intermission, scoring the first seven points of the second frame to take a 23-18 lead. Roper hit a second three during the run. He added another on an inbounds play at the 14:44 mark to give Clemson another lead at 26-24. The two teams exchanged the lead five more times from that point, the last of which came on Kadji’s three in the final minute.

Clemson had a chance to re-take the lead following Kadji’s three, but point guard Rod Hall was whistled for a charge over Trey McKinney Jones with 13.3 seconds remaining. Hall played tremendous on the ball defense versus the ‘Canes star point guard Shane Larkin, who was held to just seven points and three turnovers in 40 minutes. Hall had a chance to tie in the waning seconds, but his shot missed and two Tigers converged on a tip-in that would not fall at the buzzer.

The Tigers get a bit of a rest before returning to play next weekend at Maryland. The two teams will square off at the Comcast Center in College Park, MD on Saturday, Jan. 23 at 12:00 PM.