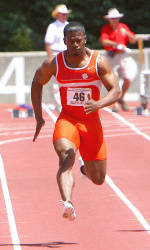 Eugene, OR – Clemson junior Travis Padgett blazed to a collegiate record time of 9.89 seconds in the 100m quarterfinals Saturday afternoon at the U.S. Olympic Track & Field Trials. His performance was the best ever by a collegiate sprinter, ahead of the previous best of 9.92 set by UCLA’s Ato Boldon in 1996. Padgett advances to Sunday’s semifinals, which begin at 2:30 PM (Pacific Time).

“I think it went well and I didn’t expect to run that fast,” Padgett said. “This is a fast track and the conditions were right today. I hope I can continue to run faster from here on out.”

Padgett entered the weekend with a personal best time of 9.96, set earlier this season in a home meet. He was NCAA runner-up in the event just two weeks ago, where he earned his third straight All-America honor in the 100m dash.

He started out solid by winning his heat in the preliminary round. Padgett posted a time of 10.06 with a slight tailwind. But it was in quarterfinal #2 where the Shelby, NC made the biggest noise. He got out to an outstanding start and ran a smooth race, winning the race with a legal (+1.6 wind) time of 9.89 seconds. Padgett’s time was second-best of the day, behind only reigning world champion Tyson Gay (9.77).

Former Clemson star Shawn Crawford ran a 10.09 in the quarterfinal round, but did not advance to the semifinals. The 2004 Olympic gold medalist in the 200m dash, Crawford competed at Clemson from 1997-2000. He will compete in the 200m as well this week. The quarterfinals for that event begin Friday, July 4.

Mitch Greeley also competed at the trials for Clemson. The senior out of Rock Hill, SC finished his career with a no-height at the starting jump of 17’8.5″. He was a three-time All-American and ACC champion for the Tigers during his four years with the program.