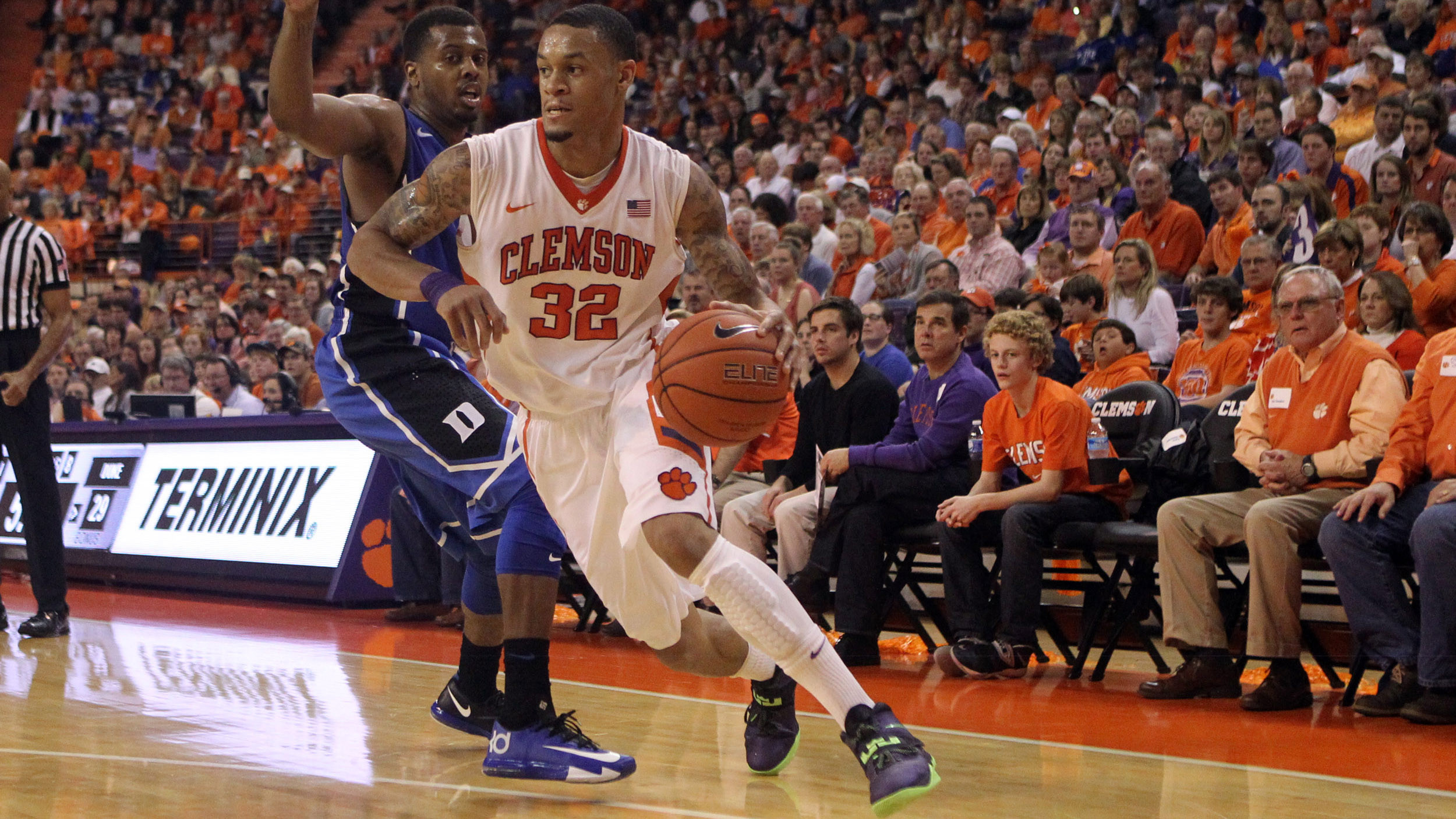 CLEMSON, SC – Clemson held Duke without a field goal over the final 6:22 and finished on a 13-2 run to claim a thrilling 72-59 victory before a capacity crowd at Littlejohn Coliseum on Saturday. The win, Clemson’s first over Duke since the 2008-09 season, moved the Tigers to 11-4 on the season and 2-1 in the ACC. The Blue Devils fell to 12-4 overall and 1-2 in conference play.

After Quinn Cook’s three cut it to 59-57 with 6:23 to go, the Tiger defense stiffened and held Duke to 0-for-11 field goal shooting to seal the victory. K.J. McDaniels led the way and was one of three Tigers to record a double-double Saturday. McDaniels poured in a game-high 24 points to go along with 10 rebounds and three blocks. Landry Nnoko scored 10 and added 13 boards and four blocks. Jaron Blossomgame played the best game of his young career with 14 points and 14 rebounds. Rod Hall was a fourth Tiger to reach double figures, scoring all 11 of his points in the second half.

Clemson shot 52 percent in the second half and finished 25-for-53 (47 percent). The Tigers struggled at the free throw line, where they had been ranked fourth in the nation entering Saturday’s game at 78 percent. Clemson missed 12 free throws but it was the Tigers’ defense that made the difference. Duke shot just 3-for-14 from three in the second half and finished 8-for-25 for the game. Rodney Hood led Duke with 20, while freshman phenom Jabari Parker added 13. Cook, who had 27 last season against Clemson in Durham, was held to seven points.

Clemson led 7-2 before Duke rattled off nine consecutive points and 18 of the next 24 overall to take a 20-13 lead. But Blossomgame rose up after a Tiger miss for an emphatic one-handed tip slam to pull Clemson within five and four points from McDaniels made it 22-19. McDaniels kept the Tigers close for most of the half, but Duke earned its biggest lead at 34-26 on an acrobatic layup by Cook.

The next possession, Hood drove the right side for a dunk and the Devils had a double figure lead heading into the final minute. McDaniels buried a wing three and the Tigers got a stop on the other end followed by a breakaway layup by Damarcus Harrison to trim the lead to five. Duke made a free throw with 3.6 ticks left to take a 37-31 advantage into the locker room.

Hall came out of halftime with an attack mentality and seven quick points by the junior brought Clemson within two at 40-38. But Hood kept making shots for Duke, who maintained a steady two-to three-point lead for the next several minutes. Blossomgame continued to put on a display, as his first three-point goal in over a month pushed Clemson ahead for the first time at 52-50. He hit another one moments later and Adonis Filer followed with a bucket to give the Tigers a five-point edge.

The Tigers travel to Blacksburg, VA to take on Virginia Tech in their next game. Clemson will square off with the Hokies at Cassell Coliseum on Wednesday, Jan. 15. The game will tip at 7 p.m. and is televised by RSN.