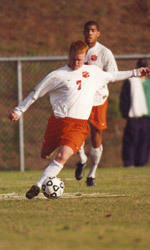 Cutler played at Clemson in 2000-03 and was a midfielder. He scored 10 goals and had 13 assists during his Clemson career. Cutler was a first-team All-ACC selection his senior season and was named the team’s MVP that year..

This brings the total to 17 for the number of players to have played for Clemson under Head Coach Trevor Adair that later played in the MLS.