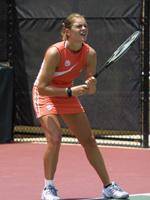 ATHENS, GA – Clemson’s Julie Coin won her first round match at the 2004 NCAA Singles Tournament in Athens, GA on Monday. The junior from Amiens, France defeated Sarah Foster of Kentucky by a score of 6-4, 6-0 to advance to the second round of the tournament. With the win, Coin, currently ranked sixth by the ITA, improves to 29-8 overall in singles.

Coin will face New Mexico’s Maja Kovacek on Tuesday in the Round of 32 at the Dan Magill Tennis Complex on the campus of the University of Georgia. Kovacek advanced to the second round with a 2-6, 6-3, 6-2 victory over Tammy Encina of Tennessee on Monday.

Coin and Tiger freshman Maria Brito (Mexico City, Mexico) will begin competition in the doubles draw on Tuesday, as they face Wisconsin’s Lindsay Martin and Katie McGaffigan. The pair is currently ranked 13th by the ITA in doubles and has posted a 24-5 overall record and a 13-2 mark in dual doubles matches on the season. During the fall season, they won the 2003 ITA Southeast Regional Doubles Championship becoming the first doubles team in Clemson history to claim the title.