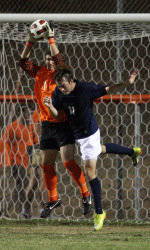 CLEMSON, SC – Clemson goalkeeper Cody Mizell was named to the 2010 Soccer America All-Freshman first-team as announced by the publication/website Thursday.

Mizell recorded two solo shutouts this season. He also had four or more saves in nine matches during the year. He had a season-high nine saves at Charlotte on September 28.

He also had the most saves by a Clemson freshman since the 1990 season when former Tiger Jaro Zawislan had 134 saves during his rookie season.

Mizell becomes the seventh Tiger to be named to the Soccer America All-Freshman team. The last Clemson player named to this team was Greg Eckhardt who made the second team in 2006. Other Clemson players who have made the Soccer America All-Freshmen team in the past are as follows: Joey Feinberg, 1987; Jimmy Glenn, 1990; Jamahl Green, 1992; Paul Stalteri, 1996; Oguchi Onyewu, 2000; Eckhardt, 2006.