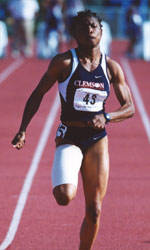 EUGENE, OR – The Clemson women’s track and field team finished seventh at the 2001 NCAA Outdoor Championships that concluded Saturday at Hayward Field. The Lady Tigers scored 28 team points in the meet, with ten of those points coming from the National Championship won by the 4x400m relay team.

This was the highest finish of any outdoor women’s track and field team in Clemson history. This also marks the first time the Lady Tigers have finished in the top ten in indoor and outdoor track in the same season.

The Lady Tigers’ 1600m relay team of Michelle Burgher, Cydonie Mothersill, Marcia Smith and Shekera Weston claimed the title, the first 4x400m relay championship in Clemson women’s track and field history. The team recorded a school-record time of 3:29.97, breaking the record they set in the semifinals (3:30.11). Burgher, Mothersill, Smith, Weston and LaShonda Cutchin earned All-American honors for their efforts in the 4x400m relay.

Clemson picked up five more team points from Shekera Weston in the 200m dash. The senior from Ft. Campbell, KY, finished fourth in the event with a time of 23.19. The fourth-place finish was an individual personal-best finish for Weston, who had previously earned All-American honors in the 200m, 400m and 4x400m relay.

The Lady Tigers’ remaining points were the result of a second-place finish in the shot put and a fourth-place finish in the 4x100m relay on Friday. Jamine Moton was the runner-up in the shot put with a mark of 56’4 ľ”, earning her third All-American honors this season as well as eight team points. Clemson’s 4x100m relay team of Shannon Murray, Weston, Burgher and Mothersill finished fourth in the finals of the 4x100m relay with a time of 44.19. The 400m relay team added five team points with their result.

Head coach Marcia Fletcher Noad said, “Overall, we did not have a great meet, but for us to finish seventh is pretty good. I am very proud of the 4x400m relay, 4x100m relay, Shekera Weston and Jamine Moton. To finish with a national championship in the 4x400m relay kind of makes up for the disappointments earlier in the week. This kind of finish makes us all feel better as we go home.”