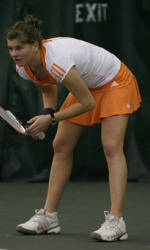 MADISON, Wisc. – The Clemson women’s tennis team captured the doubles point against Southern California on Sunday, but the Tigers couldn’t overcome the talent of the Trojans in singles play and fell, 4-3, on the final day of the ITA National Team Indoor Championships.

Clemson is now 6-3 on the year after going 1-2 over the weekend at the prestigious tournament.

Ani Mijacika and Ina Hadziselimovic downed the Trojan duo of Maria Sanchez and Alison Ramos, while Estefania Balda and Alexandra Luc clinched the sweep with an 8-7(4) win at flight three. The Clemson tandem defeated Sarah Fansler and Lyndsay Kinstler to improve to 11-4 on the year.

The Tigers took the 1-0 lead into all three matches this weekend and have dropped the doubles point just once this season.

Southern Cal picked up its first point of the day when Mijacika, Clemson’s top player, was forced to retire early in the first set of singles play. Sanchez was then credited with the win.

Alexandra Luc picked up individual wins for the Tigers at flights two and six, respectively. Bek won in straight sets over Fansler (6-3, 6-4) for her 17th victory of the season, while Luc’s three-set win against Leyla Entekhabi gave her a perfect 3-0 record for the weekend.

Balda fell to 16th-ranked Fink at the third position (6-1, 6-0), and Hadziselimovic also dropped a decision at flight five to Ramos, 6-1, 6-4. Niculescu edged Won at number four, winning both sets by a 6-4 margin.

Clemson will return to action and the Hoke Sloan Tennis Center next Sunday as the Tigers play host to in-state rival South Carolina.