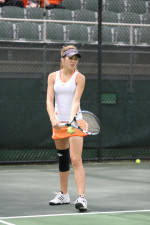 CLEMSON, SC – Junior Ina Hadziselimovic clinched a 4-3 victory for the 11th ranked Clemson women’s tennis team on Sunday in the championship match of the 2009 ITA Kick-Off Weekend. The Clemson Tigers came back to grab the victory after relinquishing a 3-0 lead and now advance to the ITA National Indoor Championships, set to begin in Madison, WI on Feb. 13.

Clemson started the day by winning the doubles point, picking up wins in the first and third flights. Ani Mijacika defeated Auburn’s Fani Chifchieva and Melissa Koning in the first flight, 8-6. Estefania Balda and Alexandra Luc followed up with an 8-5 win against Jil Hastenrath and Whitney Chappell in the third flight.

Freshman Keri Wong put Clemson on top by a 3-0 margin with a 6-2, 6-1 victory over Myrthe Molenveld at the number four position.

Balda was edged by Koning, who won 6-2 in the first set. The Clemson junior came back to win 6-4 in the second set, but dropped the third set by a 6-3 margin.

Hadziselimovic sealed the victory for the Tigers, who defeated Jil Hastenrath in straight sets, 6-1, 6-3.

In the fifth flight, Luc fell to Chappell 6-4 in the first set. She came back to defeat Chappell in the second set, 4-6, but fell 10-7 in the super tiebreaker.

Prior to ITA National Indoor round of 16 action, Clemson will play host to Furman on Feb. 5. The match is slated to begin at 3.