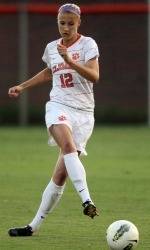 CHAPEL HILL, NC – The Clemson women’s soccer team fell in a hard-fought game to 10th-ranked North Carolina by a score of 2-0 on the road in Chapel Hill on Thursday night. The Tigers’ 11 starters played the entire 90 minutes in the loss, which brings their record to 5-8 on the season (0-6 ACC). The Tar Heels improve to 9-2 overall and 4-1 in league play with the win.

“I was extremely proud of our kids tonight,” said Head Coach Eddie Radwanski. “We played very well, especially in the first half. We came out and played with great energy and intensity. We created some good chances, though of course I would have liked for us to put one of them in. These kids have nothing to hang their heads about. If we can continue along these lines, we have nothing to worry about.”

The two teams played a scoreless first half of soccer, with each team recording four shots, one on goal, in the first 45 minutes of play. The Tigers’ best scoring chance came in the sixth minute on a corner kick by sophomore midfielder Vanessa Laxgang. Freshman defender Savannah Coiner headed Laxgang’s corner kick toward the net from inside the box, but the ball went right into the hands of North Carolina goalkeeper Adelaide Gay.

North Carolina put the game’s first goal on the board at the 64:14 mark. Courtney Jones launched a 22-yard shot into the left side of the net past the outstretched arms of Clemson’s diving keeper, Lauren Arnold. The Tigers did not allow another goal until there were just 33 seconds left on the game clock. Kealia Ohai netted the goal for the Tar Heels, which was a shot that bounced off the hands of Arnold and into the goal.

The game was fairly even statistically, with shots being 13-7 in favor of the Tar Heels. Each team had four corner kicks and two saves. There were 14 fouls called on Clemson and 12 on North Carolina in the contest. The Tiger back line of Coiner, junior Heather Marik, senior Ashlynne Bass and sophomore Erica Kim played a solid game, blocking several Tar Heel shots.

The Tigers will have a week off before they travel to the Commonwealth state for games against Virginia Tech and Virginia. Clemson will face the Hokies in Blacksburg on Thursday, October 13 and the #8 Cavaliers in Charlottesville on Sunday, October 16.