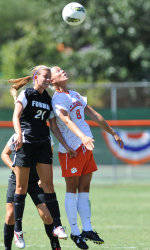 CORAL GABLES, FL – The Clemson women’s soccer team fell to Miami by a score of 3-2 in double overtime on Thursday night at Cobb Stadium in Coral Gables, FL. It was the second straight double overtime loss for the Tigers, who fall to 5-3 (0-1 ACC) on the season. The Hurricanes improve to 5-2 (1-0 ACC) with the win.

“I am very proud of the way we competed tonight,” said Head Coach Eddie Radwanski. “We started a little slow in the first half, which hurt us, but we showed tremendous character and perseverance by fighting back. The girls could have easily put their heads down after falling behind by two goals, but instead they rose to the occasion.

“We had a great start to the second half and it felt like the momentum was in our favor, but it was a battle back and forth between two teams desperate to win. We were a bit unlucky on the game winning goal, but I give credit to Miami for finding a way to score. I cannot fault the girls for the way they played tonight. I will take that amount of effort any day. There were a lot of good performances out there tonight.”

The Hurricanes scored two goals in the first 15 minutes of play to take an early 2-0 lead. Kate Howarth scored both Miami goals, one in the fourth minute and one in the 15th minute.

The Tigers fought back, as freshman forward Jóna Kristín Hauksdóttir netted her first career goal at the 19:11 mark to cut the deficit in half. Senior midfielder Rachel Hurd and junior forward Maddy Elder tallied assists on the play.

Less than four minutes into the second half, junior midfielder Heather Marik evened the score at two apiece with a header shot to the far post. Elder and freshman midfielder Liska Dobberstein assisted on Marik’s goal. Neither team scored again in regulation or the first overtime period, but just over a minute into the second overtime, the Hurricanes’ Ashley Flinn headed the game winner into the net on a cross from Tara Schwitter.

Clemson took nine shots in the game to Miami’s 11, and the Tigers had three corner kicks to the Hurricanes’ six. There were 20 fouls called on the Tigers and nine on the Hurricanes in the contest. Freshman keeper Lauren Arnold recorded one save in goal for Clemson, and Vikki Alonzo tallied a save for Miami.

Clemson will return home on Thursday, September 22 to play host to third-ranked Florida State at 7:00 PM at Historic Riggs Field. That game will begin a stretch of four consecutive Atlantic Coast Conference home games for the Tigers. All four games will be against opponents that are ranked 18th or higher in the most recent NSCAA national poll (#3 Florida State, #5 Duke, #6 Maryland and #18 Boston College.)