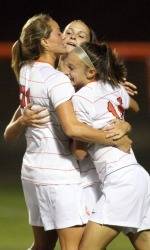 “The one positive I will take from this game is that there were a few long stretches where we played very competitively, but we cannot come out and concede a goal in the first two minutes of the game,” said Head Coach Eddie Radwanski. “We have to be better than that. We gave away two goals tonight, and you cannot do that in this league. Now we have to start thinking about Boston College. We have to regroup and get ready to play on Sunday, because they will be well rested. There are no easy games in this league, and we have to come out ready to compete in every game.”

Maryland scored quickly, putting a goal on the board less than two minutes into the game when Danielle Hubka sent a 20-yard shot into the top of the net. Hubka’s goal was assisted by Hayley Brock. The Terrapins scored again at the 22:00 mark, as Jasmyne Spencer intercepted a ball that was misplayed by a Tiger defender inside the box. Spencer scored with a shot on the ground from 10 yards.

Freshman forward Liska Dobberstein put the Tigers on the board at the 33:52 mark. Senior midfielder Rachel Hurd crossed the ball in to Dobberstein from the right side. Dobberstein scored from close range, for her sixth goal of the season. The goal cut the Terrapins’ lead to 2-1, a score which stood at the end of the game, as neither team scored in the second half of play.

Clemson took 17 shots in the game and had nine corner kicks, while Maryland took six shots and had five corner kicks. There were eight fouls called on the Tigers and three on the Terrapins in the contest. Sophomore keeper Morgan Hert recorded one save in goal for the Tigers and Yewande Balogun posted six saves for Maryland.