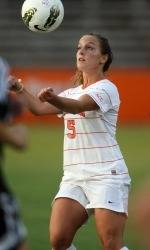 CLINTON, SC – The Clemson women’s soccer team won its first road game of the 2011 season on Sunday afternoon, defeating Presbyterian College by a score of 8-0 at Martin Stadium in Clinton, SC. Junior Maddy Elder tallied two goals and an assist in the game, while sophomore Deana Sherry added two goals to the Tiger effort. Clemson improves to 3-0 on the season with the win, while the Blue Hose fall to 0-2 with the loss.

Elder scored the Tigers’ first goal in the 12th minute of play when her shot deflected off a Blue Hose defender and into the left side of the net. Sophomore Vanessa Laxgang put Clemson up 2-0 with an unassisted goal in the 19th minute. Sophomore Hailey Karg scored on an open net at the 35:40 mark after receiving a cross from the right side from freshman Liska Dobberstein.

Just 50 seconds later (36:30), sophomore Deana Sherry scored her first goal of the game. Freshman Stacey Huddleston came up with a ball lost by the Presbyterian College goalkeeper and passed it to Sherry, who scored from close range. Sherry struck again in the 42nd minute, this time with the assistance of freshman Jennifer Bass. Sherry’s second goal gave Clemson a 5-0 lead heading into halftime.

Less than six minutes into the second half, Elder converted on a penalty kick for her second goal of the day. Dobberstein added a goal to the Tiger effort at the 54:35 mark as her shot from inside the box bounced off the hand of the Blue Hose goalkeeper before heading into the right side of the net. Elder recorded an assist on the play.

Redshirt sophomore Brittany Beaumont recorded her first career goal in the 86th minute. Beaumont shot the ball from 25 yards into the top left corner of the net to conclude the scoring for the Tigers.

Clemson outshot the Blue Hose 30 to one in the game, and had four corner kick opportunities to PC’s zero. Sophomore Lauren Arnold earned her third win in goal for the Tigers, and recorded one save in the contest. Sarah Beth Anderson tallied five saves and Jordan Broadway posted one in goal for the Blue Hose.

“This was a good collective effort by the team,” said Head Coach Eddie Radwanski. “The week of training allowed us to work on some things, and it was nice to see the team implement those things into the game. When we keep things simple, it makes the game easier.

“The girls showed a lot of confidence in front of the goal today, and that led to some good goals being scored. It was nice to see a number of players getting on the score sheet. Overall, it was a positive day for the team. Tomorrow, it is back to work for next week’s games.”

Clemson will travel to Boone, NC on Friday, September 2 to face Appalachian State. The game between the Tigers and the Mountaineers is scheduled to begin at 7:00 PM at ASU Soccer Stadium. The Tigers will then return home to Historic Riggs Field to play host to Northeastern on Sunday, September 4 at 12:00 PM.