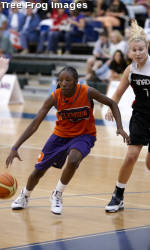 Lady Tigers defeat four universities by an average of 22.3 points per contest.

CLEMSON, SC – The Clemson Women’s Basketball team wrapped up a successful western Canadian Tour on Friday, returning to the states with a 4-2 overall scrimmage mark. The Lady Tigers played six games on their tour, including two with the Canadian National team, and one each against the University of British Columbia, Trinity Western, University College of the Fraser Valley, and Vancouver Island University. The Canadian National team is gearing up for the 2009 FIBA World Championships.

The Lady Tigers played doubleheaders each of the first two days on the trip, playing Team Canada first each time. The two games against the national team were the only losses on the trip for the Tigers, while they won each of four scrimmages against various universities by an average of 22.3 points per contest. Clemson is widely regarded as the first women’s team from a major NCAA conference to visit many of these universities.

Clemson won the four games without All-ACC player Lele Hardy, who made the trip but was unable to participate due to injury. Additionally, top 100 freshman point guard Keyrra Gillespie was unable to make the trip. The team was able to navigate the games without two of its major contributors for the upcoming season.

The Lady Tigers have had the trip planned for some time and were able to work in 10 extra practices and six live game scrimmage situations as part of the trip. Head coach Cristy McKinney spotted this offseason for the trip years ago because so many of her players return from a season ago, and it can help as a tool in helping the team mesh and getting them a head start on the 2009-10 season.

Overall, McKinney was pleased with the journey, saying, “”First and foremost, we are so grateful to the athletic department for providing us with this opportunity. Its been phenomenal. We played six scrimmages against quality opponents. The two exhibitions with Canadian National Team were extremely helpful for us in evaluating our team against highly skilled and experienced players. We played four universities, and we were able to execute against them and come away with some good wins. The last game we played was our best, which means we improved.”

Senior Morganne Campbell said, “I thought the trip was really good basketball-wise and for us as a team. We played against very good competition, in the Canadian National Team and I thought we competed very well against them. Against the four universities, we did what we had to do to win. I feel like everyone played well and we got contributions from everyone and were able to execute and play together as team and gel and I think that will help us for the upcoming season.”

Assistant coach Todd Steelman echoed the sentiments, saying, “I think this trip has been really good for us–it got the girls out of their comfort zone, and it gave us all a chance to see each other in a different environment. The games were good for us, too. Morganne [Campbell] played very well on both ends, and really shot it well, Sthefany [Thomas] shot the ball great, and [Shaniqua] Pauldo was pretty good, too. It was an overall great experience for us to build momentum coming into the 2009-10 season.”

The Tigers took the trip as part of the Basketball Travelers, Inc. program. Basketball Travelers, Inc.’s main focus is to provide college basketball programs with unique ways to build team unity and boost game experience while enjoying some of the world’s most beautiful destinations. The team will return to Clemson on Friday and prepare for classes next week, before gearing up for individual workouts.