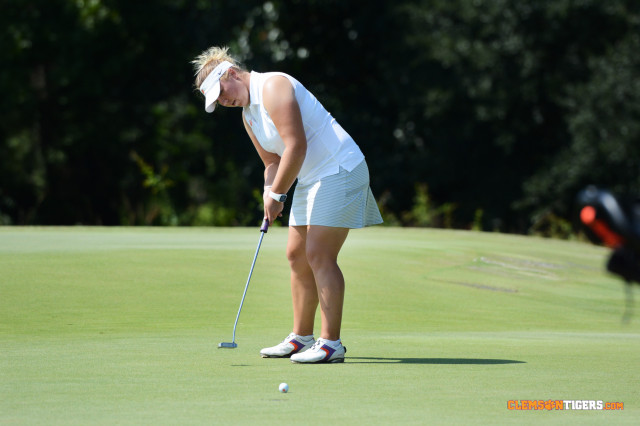 Clemson Women Tied for 10th after First Round of Sugar Bowl

Clemson, S.C.—Junior All-American Alice Hewson fired a one-under-par 71 on Sunday to lead Clemson to a 297 team score and a tie for 10th place after the first round of the Allstate Sugar Bowl Intercollegiate at English Turn in New Orleans, Louisiana.

The 17-team field field includes 10 of the top 25 teams in the nation. Clemson is just five shots behind fourth-place Southern California entering Monday’s second round.

The 54-hole, three-day event will continue with the second round on Monday morning a the 6,239 yard course.   Florida stands in first place at the end of the first round with a five-under-par score of 283, while Michigan State is second at 284.

Hewson averaged 71.09 for her 11 rounds in the fall and kept that average with her 71 on Sunday.   She had five birdies and four bogeys and is ranked ninth after the first round. She now has 51 birdies for the season and it was her 26th career under-par round.

Marisa Messana was Clemson’s second best player on Sunday with a two-over-par 74. The consistent graduate student had 16 pars, more than any other player in the field, and had two bogeys.

Sydney Legacy had a 75 in her first round of the spring. The native of Lexington, S.C. had five bogeys and two birdies, but finished strong is a one-under-par 35 on the front nine, her second nine of the day.

Ana Paula Valdes played the last five holes in six-over-par and finished with a 77.

Freshman Callista Rice played her first career round in the Clemson lineup. She was just three-over-par for her first 15 holes, but had a bogey and a triple bogey over her last three holes.