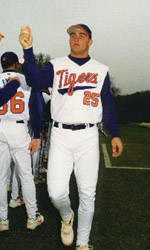 Junior pitcher Steve Reba got the win for the Tigers. The right-hander allowed just one run, two hits and one walk while striking out nine batters over six innings. The strikeout mark broke his previous high of eight against George Mason in 1999. Richmond’s Bobby Basham was credited with his second loss of the season.

Clemson scored in the second inning when Johnson’s single to center field plated designated hitter Jarrod Schmidt. In the fourth inning, Coder reached base on a single, advanced to third after an errant pick-off attempt and scored on a passed ball.

Richmond made it 2-1 in the fifth inning after an infield single by David Reaver drove in third baseman Mike Gula, but Clemson pulled away in the sixth inning. A Coder single scored Schmidt and Johnson followed with a two-run homer that cleared the fence in left field.

The Spiders threatened in the seventh inning after scoring two runs. A failed squeeze attempt turned into a double play that ended Richmond’s rally hopes. Coder hit his first career homerun in the eighth inning and Johnson scored later in the inning to make the final margin 7-3.