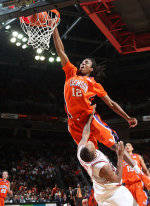 Arguably the biggest contributor, however, was freshman Andre Young, who played 26 minutes for Demontez Stitt who was in foul trouble for most of the game. Young had a career-high 13 points, eight assists, and four steals and sparked Clemson’s first half run. Young also hit one of the biggest shots of his career from the right wing with just under eight minutes to stretch the Tiger lead to ten.

Devan Downey was the game’s leading scorer with 37 points on 14-21 field goals and 8-12 from the line, but the Tigers turned him over eight times on the evening. Zam Fredrick scored 11 of his 19 points after halftime, and Mike Holmes had 13 points and 11 rebounds.

South Carolina jumped out to a quick 6-0 edge in the first 1:23, forcing head coach Oliver Purnell into a timeout as Gamecock point guard Downey picked off an errant pass for a fast break layup. The Gamecocks extended their lead to 11, 14-3 at the first official timeout, as Dominique Archie knocked in a three-point basket, his sixth made three of the season.

With sophomore guard Stitt on the bench in foul trouble, Young sparked the Clemson pressure, picking up two consecutive steals from Downey and turning them into points, one on a feed to Booker, and once keeping it for himself. With his efforts, the Tigers went on a 12-3 run of their own to cut the lead to 17-15 with 11:58 remaining in the half.

Raymond Sykes provided one of the highlights of the season, as he ran the floor and took a bounce pass from Young on a fast break and dunked over Archie drawing a foul, and igniting the Clemson fans in attendance. Sykes knocked down the free throw to put the Tigers up four. Young notched six assists in the first 13 minutes of game time.

Clemson extended the lead to seven at 39-32 on a jumper in the paint from Young. Trevor Booker added to his impressive list of thunderous dunks as he rebounded a layup by Oglesby on the left side of the basket and hammered the ball through the goal on a put back slam to make the score 41-36.

In the second half, a floater by Young gave the Tigers a 66-48 advantage with a little over 14 minutes to go. The Gamecocks closed the gap to eight on a three by Fredrick with 11:48 on the clock before Oglesby quickly responded with a three of his own. Minutes later, Fredrick added a three in transition to cut the deficit to six, but Oglesby again responded with a three and then stole the inbounds pass to put the lead back to 11 with 9:37 remaining.

With the Tigers clinging to an eight-point lead with just under eight minutes left, Stitt, broke down Downey to get to the middle and found Oglesby, who hit his sixth three of the game. Booker then picked Downey’s pocket in transition and Gamecocks were forced to foul Rivers in transition, who calmly knocked down both ends of a one-and-one to give the Tigers an 89-76 lead.

Downey stole the ball from Stitt and scored to cut into the lead further at 89-82 with 1:35 left. However, the Tigers answered again with a Rivers layup on a nice feed from Potter. The Tigers knocked down 80 percent of their free throws, including 7-7 in the final 52 seconds.

The Tigers will bring in the new year with a home game against East Carolina on Saturday, January 3, slated to tip off at 4:00 pm in Littlejohn Coliseum.