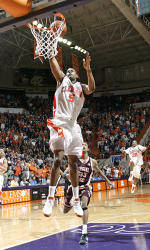 *Sharrod Ford scored on a dunk with 0.2 seconds left off a pass from Shawan Robinson to give Clemson a 66-64 victory over Virginia Tech. It is the latest game winning basket in Clemson history. The previous latest game-winning basket was Greg Buckner’s dunk with 0.6 seconds left to beat North Carolina in the 1996 ACC Tournament, 75-73. There have been six recorded scores with one second left that have won games for Clemson, but none at the buzzer.

*Olu Babalola, like Ford a senior in his final regular season home game, scored a three-point goal with 9.8 seconds left to tie the game. Babalola had made just 2 of his last 16 three-point goal attempts over a nine-game period before hitting that tying shot. He had made just two three-point goals in the last eight games prior to tonight. He was 1-9 from the field from anywhere against Virginia Tech prior to his game tying shot with 9.8 seconds. He finished with seven points and seven rebounds and did not have a turnover in 22 minutes.

*Seniors Babalola and Ford combined to score Clemson’s last 10 points of the game. Ford had seven and Babalola had three.

*Clemson has now won two ACC games within a three-day period. This is the first time Clemson has won two ACC games in a three-day period since the 1989-90 season when Clemson defeated Virginia and NC State in consecutive games between Feb. 10-12. The victory on Tuesday night was Clemson’s first ACC win on one-day’s rest since the 1992-93 season when Clemson defeated Maryland at Clemson. Clemson had lost 13 consecutive ACC games with just one day to prepare prior to tonight.

*Clemson and Virginia Tech traded two-point victories this year in games that were decided by steals within the last 10 second of the game. When Virginia Tech defeated Clemson in Blacksburg earlier this year, Carlos Dixon made a steal with eight seconds left, drove and dunked with six seconds left. Tonight, Shawan Robinson made a steal with five seconds left, drove to mid-court and fed Sharrod Ford for the winning dunk with 0.2 seconds.