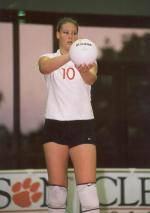 Clemson Volleyball To Play Host To Maryland and Virginia

This weekend, several former Tiger volleyball stars will be in town for alumni weekend. Fans are invited to join the alumni on Friday evening to “Tailgate with the Tigers”. The cookout will begin at 5:30 p.m. outside of Jervey Gym.

The Tigers enter this weekend with a 13-10 overall record and 4-4 mark in conference play, after falling to Duke last weekend. So far this season, Clemson has posted ACC wins over Virginia, Maryland, Florida State and NC State. Clemson has posted a 10-2 record on its home court, losing only to #11 North Carolina (3-2) and then-ranked #21 Georgia Tech (3-2).

The Tigers hold a 23-21 edge all-time against Maryland, and have posted an 8-6 mark over the Terrapins in Jervey Gym.

Virginia enters Saturday’s match with a 7-17 overall mark and an 1-7 record in the ACC. The Cavaliers split last weekend’s matches, losing 3-0 to #11 North Carolina, but defeating NC State 3-0. The Cavaliers are led by Paige Davis with 240 kills and a 2.82 kills per game average. Davis has recorded a team-best 29 service aces and is second on the team with 242 digs. Simona Kuipers has a team-high .206 hitting percentage and has posted 159 kills. She is the team’s top blocker with 74 blocks (15 solo). Whitney Ashcraft has tallied 354 digs this season for a 4.16 digs per game average. Kristin Chaney has handed out 505 assists, while Lily Phillips has recorded 349.

Clemson holds a 27-8 all-time record against the Cavaliers, with a 13-3 record over Virginia in Jervey Gym.

Admission is free to all home volleyball matches in Jervey Gym.