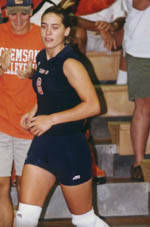 AUBURN, Ala. – The Tigers picked up their third win of the season with a 15-8, 15-7, 15-9 victory over the Navy Midshipmen in the second round of the Auburn Invitational Saturday morning. Clemson improves to 3-6 overall while Navy falls to 5-8 on the season.

Clemson plays Appalachian State Saturday afternoon at 4:00 p.m. in the final round of the Auburn Invitational.