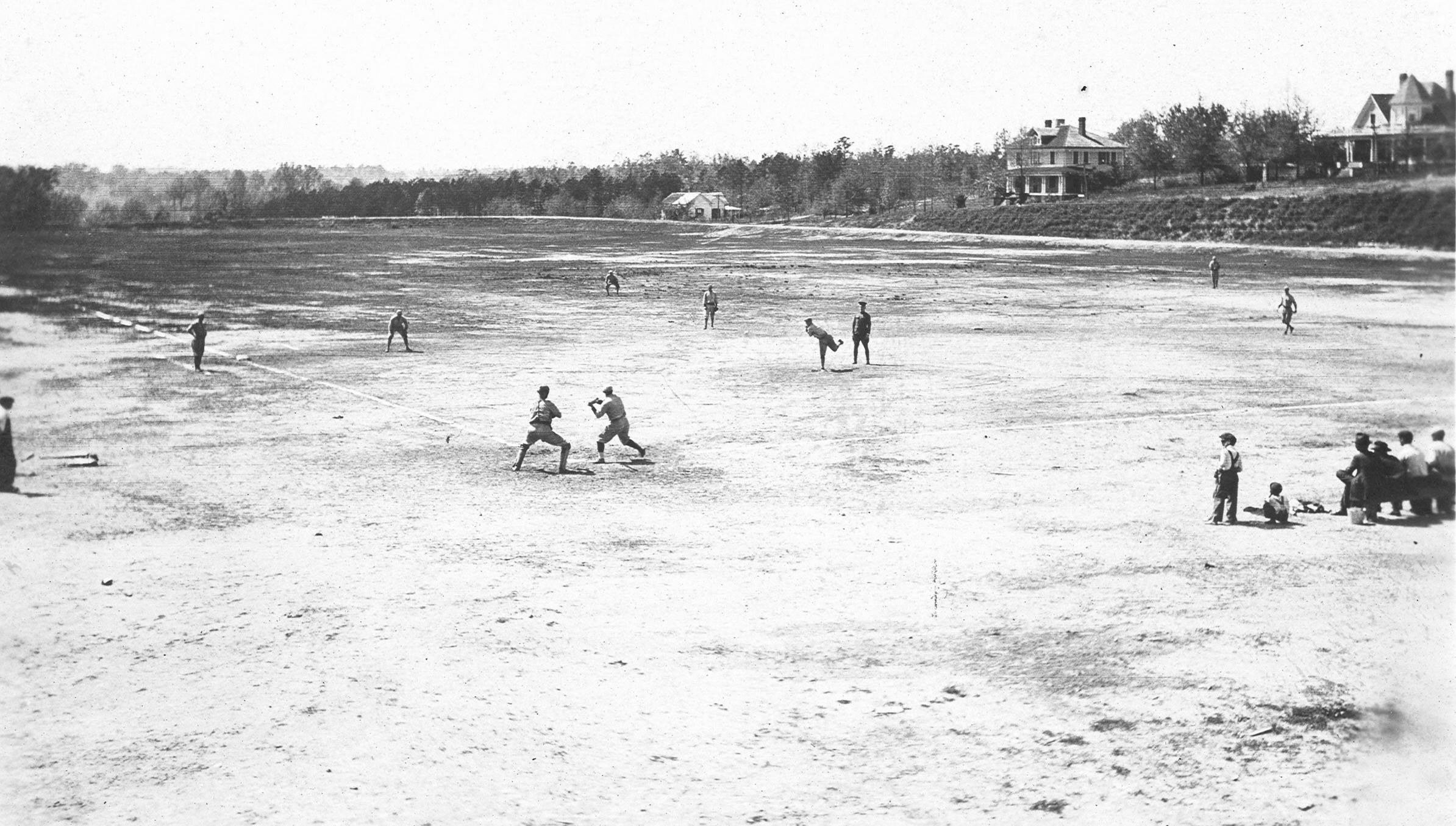 It was an exciting day for Clemson 98 years ago on March 27, 1916. Not only was it opening day for the baseball team, but it was the first time that Riggs Field would be used for baseball. Riggs Field was dedicated earlier on October 2, 1915, when Clemson and Davidson played to a 6-6 tie in football.  Prior to the opening of Riggs Field the football, track, baseball, and even basketball teams used Bowman Field for competition and practice. West Virginia Wesleyan was the baseball team’s opening day opponent on March 27, 1916.  The Tigers were victorious 4-2 in this game.  The winning pitcher was the Tigers’ captain, Carroll Anderson who allowed only three hits and he also struck out six batters. The catcher for the Tigers was James “Mutt” Gee, who would later become Athletic Director at Clemson. Jim Parker was the leading hitter for the Tigers in the first game at Riggs Field as he was a home run shy of hitting for the cycle as he had a single, double and a triple. The game lasted two hours and 10 minutes. In this first game, the home plate was at the corner of Riggs Field closest to Hortzendorff YMCA building. A few years later the baseball diamond was moved where the Tennis courts are located now with home plate located in the corner closest to Fike Field House.  Historic Riggs Field was the home of Clemson baseball during the 1916-1969 seasons. Many Clemson star baseball players performed on Riggs Field. Big leaguers, Flint Rhem, Harold Stowe, Ty Cline, Joe Landrum, Norm McMillian, and Billy O’Dell all played at Historic Riggs Field for the Tigers. With the overuse of Bowman Field and the need for a seated stadium, Clemson embarked on building its first athletic facility—Riggs Field. Perhaps one of the first big “stepping stones” in helping make Clemson successful in athletics today was the construction of Riggs Field.  Named after one of the most beloved leaders of the early years at Clemson.  Riggs Field is one of the oldest continuously used Athletics Field on a college campus.         Construction of Riggs Field started in the early summer of 1914.  Approximately $10,000 was appropriated for the construction of the facility, which covered almost nine acres.  Before its completion, the Clemson Board of Trustees unanimously agreed to name the new athletic complex Riggs Field in honor of Clemson’s first football coach and originator of the Clemson Athletic Association, Dr. Walter M. Riggs. Riggs was the first football coach at Clemson in 1896.  He stepped down as head coach in 1897 to devote full time to academics, as he was an engineering professor. He also coached the team in 1899 because the athletic association was low on funds.  However, in 1900, the search for a new coach must have been serious, as Riggs hired John Heisman to coach the Tigers. Although no longer the head coach, Clemson athletics and Riggs could not be split.  Although not given the title, Riggs also was the equivalent of an athletic director, managing the money and making contracts with other teams.  The well-respected Riggs also held many positions over the years in the Southern Intercollegiate Athletic Association (SIAA), an early conference preceding the Southern Conference.  Riggs later became president of Clemson on March 7, 1911.  He served in this capacity until his death in 1924.