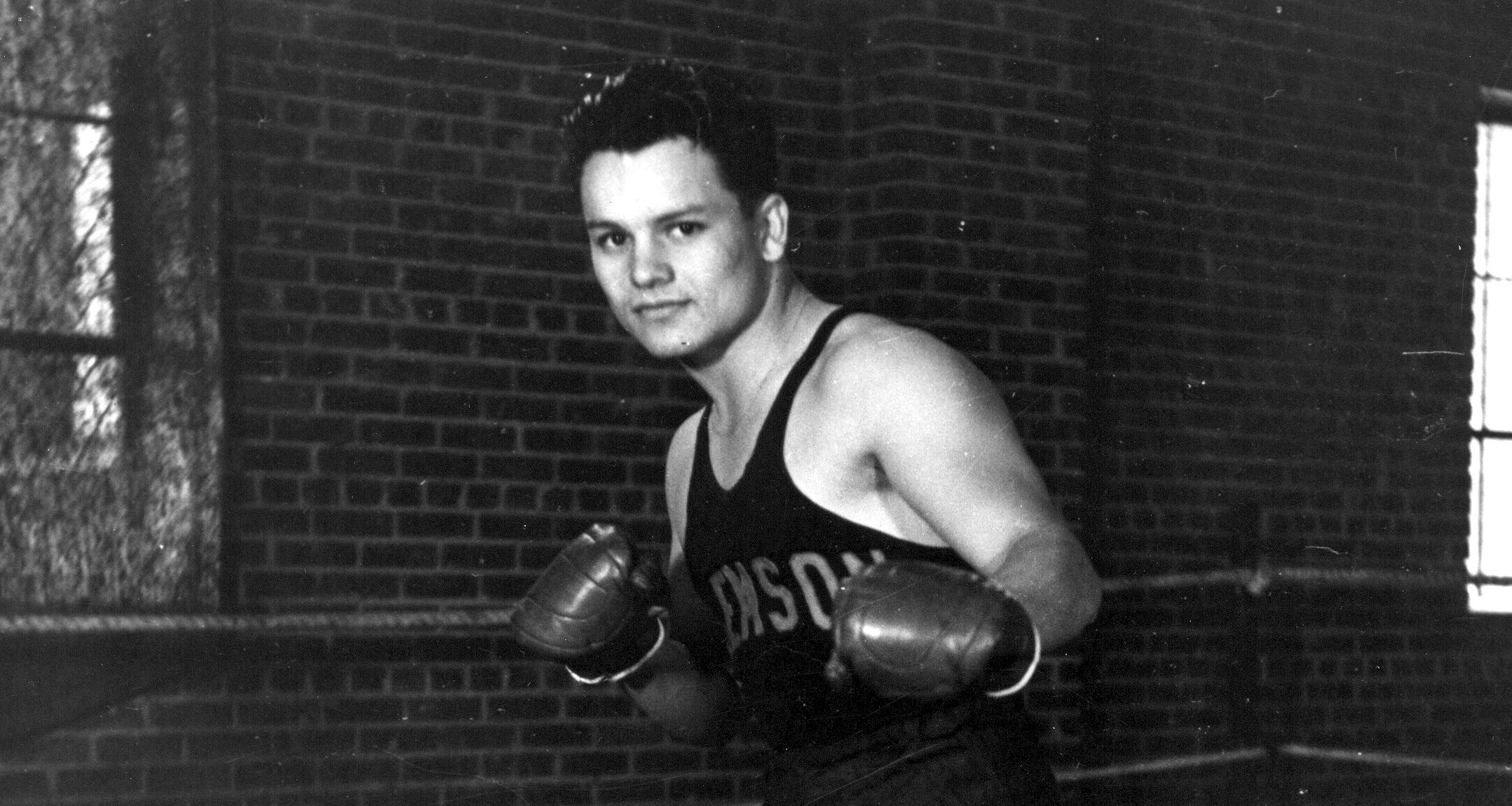 Clemson’s John Murray had the distinction of being a finalist in the 1938 NCAA Boxing Tournament in the 125-pound weight class (76 years ago on April 2nd).  Murray, a 125-pound boxer from Charleston, SC, stood 5’1” and was a very successful fighter for the Tigers.

Boxing was a popular sport among the students and fans at Clemson.  The Tigers fielded a boxing team in 1928-1948 and had much success during this time.

In 1937, he reached the finals of the Southern Conference Championships and lost in a controversial bout with Tom Birmingham of Maryland.  Birmingham won the decision, which met the disapproval of the crowd.  He also hit Murray after the bell after the second round. That year, Murray went to the NCAA Tournament and finished sixth in the 125-pound class in 1937 in Sacramento, CA. During his senior season in 1938, Murray reached the semifinals of the 125-pound class in the Southern Conference Tournament.  Clemson finished the year with a 4-1-1 record and won the Southern Conference Championship.  Clemson was first with 16 points, followed by The Citadel with 11, and Duke with 10.  Maryland, North Carolina, and South Carolina tied for fourth with eight points, and N.C. State was seventh with three points. The Tigers’ Russell Dorn was conference champion in the 155-pound weight class, while Harvey Ferguson of Clemson won the 175-pound conference title. On April 2nd, 1938, Murray fought his way through the NCAA tournament and lost to Maryland’s Ben Alperstein in the NCAA Championship bout in Charlottesville, VA. He became Clemson’s second athlete to finish second in a NCAA competition.  Track standout Ross O’Dell finished second twice in the pole vault during his career in 1926-28.

Murray graduated with two degrees from Clemson.  He started his academic career at the College of Charleston but decided to transfer to Clemson.  After transferring to Clemson, he joined the boxing squad and soon made a name for himself. He enrolled at the Medical University of South Carolina in 1938 and graduated in 1942.   During World War II, he was a doctor on board Navy ships, transporting troops in preparation for the D-Day invasion.  Because of a shortage of medical personnel during that time, he also performed dental work and was even called on to become a psychiatrist. He would talk with his soldiers and play board games and card games to help get the troops’ minds off of the war.  In 1942 and 1943, he was an intern at Staten Island Hospital.  He was stationed at Newport, RI in 1944-45. After the war, he worked in Public Health in Washington State.  There he worked with Native Americans and at the Reservation of Neah Bay, located near the Canadian border.  After noticing sickness and various problems among his patients, he was the first doctor to realize that there was an outbreak of tuberculosis there.  After vaccinations, and a little time, the health of the Native Americans improved and he was credited in saving scores of lives there. During the war, he had a friend burned to death in an accident.  He also did research on burns while studying in Charleston.  This fascinated him and he wanted to improve the treatments when a person was burned. During the late 1940s, he was in Rese, Florida at the Rayford Prison Hospital Ward.  There he worked and invented a lotion that would turn, as some observers described, “a third-degree burn into a suntan.” “I wish we would have gotten the lotion analyzed and put it on the market to help people, but he died before he could do much with his invention,” said John Murray, a son. “He was also a chiropractor and medical doctor.  He believed in providing drugs and doing prevention for better health.  He also believed in going the least invasive way when dealing with treatment.  He encouraged liquid vitamins and I remember growing up we were never ill, and I think it was because of the vitamins and prevention.” While in Florida, he started a hospital along with another doctor, as he performed his duties at the prison. On January 26, 1948, he died of a heart attack at Raeford, FL. “He loved Clemson,” said John. “To him, there was no place like it.”