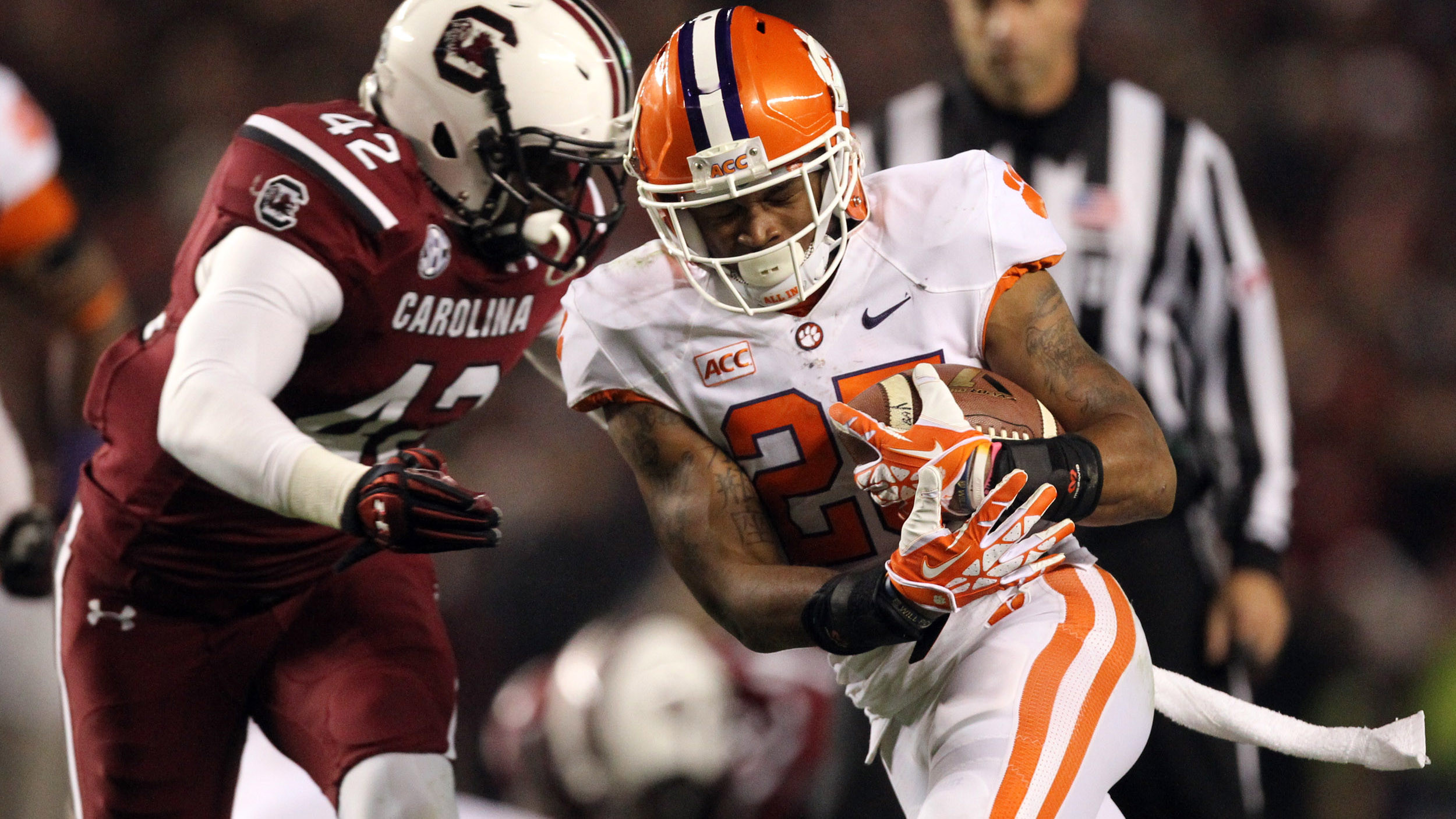 COLUMBIA, SC – Clemson had its chances, but six turnovers proved too much to overcome in a 31-17 defeat to South Carolina on Saturday night at Williams-Brice Stadium.

The Tigers (10-2) held their own in a number of statistical categories, as they rallied from a 10-point deficit in the first half to tie the game at 17 late in the third quarter.

But after South Carolina (10-2) went back up by a touchdown, Clemson turned the ball over on all four of its fourth-quarter possessions to end its hopes of a rally.

“The story of the game was the turnovers,” Clemson head coach Dabo Swinney said.

No. 6 Clemson actually outgained the 10th-ranked Gamecocks 352-318 in terms of total yardage, but South Carolina didn’t turn the football over at all, while it turned the Tigers’ six giveaways into 21 points.

In many ways, turnovers told the story of Clemson’s regular season. It committed 10 turnovers in the two games it lost and a total of 12 in the 10 games it won. The Tigers were outscored 45-0 in their two losses in points off turnovers and won that statistic 101-12 in the 10 games they won.

“You can’t turn the ball over and beat good teams,” Swinney said. “It was the difference in the game, no question about it.”

The Tigers dug themselves an early hole with two first-quarter turnovers that their rivals from the Midlands turned into 14 points.

Clemson marched 46 yards on seven plays and moved the chains three times on its opening drive, but a bit of early trickery went awry when a double pass was picked off near the goal line by South Carolina safety Brison Williams.

Boyd threw a lateral out to Sammy Watkins, who set himself and threw downfield for Adam Humphries. But the pass was underthrown, and Williams was waiting to snatch it out of the air.

“We wanted to be aggressive early and didn’t have a problem on the play call, but they were just better than us on the play,” Swinney said.

South Carolina responded with a methodical 17-play, 80-yard drive that culminated in a three-yard run by quarterback Connor Shaw for a 7-0 lead.

Clemson wasted no time going right back down the field, as Boyd hit Watkins for a 57-yard gain on the second play of the ensuing drive, and Boyd plunged in from eight yards out two plays later to tie the contest at 7-7.

Clemson’s defense came up with a quick three-and-out to force a punt, but another blunder gave the ball right back, as Martavis Bryant collided with Humphries, who was attempting a fair catch, and the Gamecocks recovered at the Tigers’ 33.

“I don’t think we helped ourselves out on offense, and we had too many turnovers on special teams,” Watkins said, “and when that happens against a great team, you’re going to lose the game.”

South Carolina converted on the mistake five plays later, as Shaw hit Shaq Roland for a nine-yard touchdown that made the score 14-7 just six seconds into the second quarter.

After a Tiger punt, the Gamecocks put together another long drive – 13 plays and 65 yards – but the Clemson defense held them to a field goal that made it 17-7.

The Tigers pulled back within one score as time expired on the first half, as Chandler Catanzaro made a 38-yard field goal to send the teams into the locker room with the score 17-10.

In addition to the two first-half turnovers, another reason for Clemson’s deficit was its inability to get off the field defensively.

South Carolina converted eight of 11 third-down attempts in the first half, many of them in third-and-long situations, and that led to the Gamecocks possessing the ball for nearly 20 of the first 30 minutes of action.

“It’s real frustrating, especially when you’ve got an idea what they’re going to run,” defensive tackle Grady Jarrett said. “They killed us with the (quarterback) draw. We just didn’t execute as a whole unit. And that’s what’s disappointing about it – when you put all the work in and then on game day you just can’t get it all together.”

Clemson’s defense opened the second half with two stops in its own territory, and after the second one, the offense took advantage.

The Tigers went with a power ground game, running the ball nine times as part of a 15-play, 88-yard march that ended in a four-yard Roderick McDowell touchdown to tie the game 17-17 with 3:01 left in the third quarter.

McDowell, who finished with a game-high 111 rushing yards, began the play in the slot, motioned into the backfield, took a wide handoff and lost ground initially, but stiff-armed a defender at the 11-yard line, turned upfield and hurdled into the end zone.

But the Gamecocks came right back with a 75-yard march and reached the end zone on a two-yard plunge by Mike Davis to take a 24-17 lead with 11:47 left.

Clemson looked to march for a tying touchdown, getting as far as the South Carolina 30-yard line thanks in large part to a 22-yard run on third down by McDowell. But Boyd scrambled on a second-down play and fumbled the ball as he fought for yards.

“I was just trying to get an extra effort,” Boyd said. “I thought I had gotten down, but I got lifted back up and the ball came out.”

The Clemson defense forced a punt when it needed to, but Humphries fumbled the ball on the return, and South Carolina took back over on Clemson’s 34.

Just three plays later, Cooper threw a 26-yard touchdown pass to Brandon Wilds to make the score 31-17 with 3:44 left and seal the victory.

“This is a very painful loss,” Swinney said. “I thought our guys fought hard. I thought they fought real hard. In the first half, we were obviously very disappointed … but it was a one-score game at the half, and I thought we played much better in the third quarter and kind of got the momentum back.

“It was 17-17 in the fourth quarter, we’ve got a chance to win the game, and we just had some critical mistakes.”