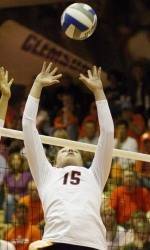 Sandra Adeleye, who entered the night with 990 career kills after a big 19-kill effort on Friday, continued her hot hitting, nailing 16 kills to push her over the career milestone. For the weekend, she had 35 kills and hit nearly .500.

Hannah Brenner guided Clemson to .333 hitting on Saturday, with 57 kills to just 12 errors, the second straight match Clemson eclipsed the .300 mark. The sophomore had 50 assists in the four-set match, and found four different players for nine or more kills. Junior Serenat Yaz each had 16 kills to lead the Tigers, and also added 12 digs for her eighth double-double of the season.

Alexa Rand provided a good two-way spark, registering 10 kills on .333 hitting and eight blocks, giving her 19 rejections on the weekend.

Libero Cansu Ozdemir also had a strong evening both ways, garnering five kills in 12 swings, and going a perfect 34-for-34 in serve receive opportunities, and also collecting 11 digs.

Clemson had a key 5-0 run in the second set to take a 16-11 lead behind three straight blocks, and stretched the lead to seven at 22-15 on a kill from Adeleye. Clemson hit jus t.219 in the set, but held Wake Forest to just a .045 mark, with 12 attack errors. The difference in the set was Clemson’s six blocks, including five from Rand and two from Simmons. Clemson got three kills and a block from Yaz in the last four points to claim the set, 25-16.

The Tigers carried some momentum on in the fourth set, taking the lead early and holding on. With the score knotted at 11-11, Clemson went on a 4-1 mini-run to give them some breathing room, which they’d hold on to for the set, winning 25-22 after Wake got to within one on three occasions. Clemson had 19 kills in the set, including six from Yaz and four from Rand, while Brenner dished out 17 assists. Clemson was able to side out on 18-22 (81%) of their opportunities to clinch the match.

Clemson heads on the road the next two weekends, playing next on Nov. 4th and 6th at Maryland and Boston College.