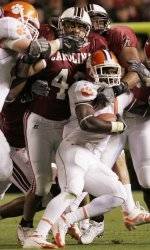 COLUMBIA, S.C. (AP) – James Davis rushed for 145 yards and his 2-yard touchdown run lifted the Tigers to their eighth victory in the last nine tries against the 19th-ranked Gamecocks, 13-9 on Saturday night.

The Ol’ Ballcoach had hoped to conclude a season of success — the Gamecocks broke long streaks of failure with wins over Tennessee and Florida this year — with South Carolina’s first victory over Clemson since 2001.

Instead, Davis and quarterback Charlie Whitehurst showed Spurrier why Clemson (7-4) has been so tough to handle for the Gamecocks.

Trailing 9-6 and facing first-and-35 after two penalties, Whitehurst completed consecutive passes of 9 yards to Davis, 14 yards to Chansi Stuckey and 28 yards to Curtis Baham to South Carolina’s 27. Davis took over from there. He burst through for a 23 yards gain and, two plays later, bulled into the end zone for the game’s only touchdown.

South Carolina had a final chance, driving to Clemson’s 43 with three minutes left. But on fourth-and-6, Blake Mitchell’s pass was tipped by Rashaad Jackson and intercepted by Charles Bennett with 2:26 to go.

Clemson sealed the win moments later when, on third-and-10, Whitehurst ran for the first down, holding the ball in the air to the mostly quiet stadium — except for those orange-clad fans saluting the first Clemson passer to go 4-0 against South Carolina (7-4).

For Spurrier, the loss was just his latest against a member of the Bowden family. He’d gone 5-8-1 against father Bobby and Florida State, and now stands 0-1 against son Tommy, although Spurrier was 4-2 against Auburn when Terry Bowden was the coach.

The win was Clemson’s fifth in six games to close the regular season. South Carolina had won its previous five straight.

When it was done, both teams left in orderly fashion, unlike the ugly brawl in the fourth quarter of this game a year ago. In a symbolic show of putting that incident behind them, players from both teams at midfield after the coin toss to shake hands.

South Carolina lost its chance at the Southeastern Conference championship earlier Saturday with Georgia’s 45-13 win over Kentucky. If the Gamecocks were bothered by missing out on the title, they didn’t show it.

South Carolina’s defense got after Whitehurst, intercepting him twice to end drives and holding him to 27 yards passing in the first half.

And while the Gamecocks offense put up nearly triple Clemson’s yardage, 251-84, they could only manage field goals of 23 and 43 yards by Josh Brown to lead 6-3 at halftime.

The Gamecocks have made a habit this year of scraping by — and it looked like it might happen again when Chris Hampton blocked a go-ahead field goal try in the fourth quarter. Then Stuckey muffed a punt and Tremaine Tyler recovered on the Tigers 10. All the Gamecocks could manage was Brown’s third field goal.