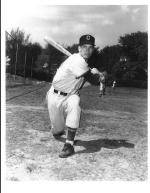 Bennett also announced that the facility would be called Doug Kingsmore Stadium, Home of the Clemson Baseball Tigers.

In accepting the honor Kingsmore said, “Life has been all I could have asked for and more. I’ve been blessed to have the business and professional opportunities aforded me and doubly blessed with a family that’s truly loving and supportive. With Clemson’s strong legacy and promising future, its’s a pleasure to give something back that will affect the lives of many who participate and become part of the Clemson family in the future.”

Kingsmore played for the Tigers varsity from 1952-54. An All-ACC and All-District III outfielder in 1954, Kingsmore became the first Clemson player in history to hit 10 home runs in a season. He did that in 1954 while playing in just 24 games. He led the ACC in home runs and runs scored (25) that year and led the Tigers in batting average (.371), slugging percentage (.742) and RBIs (27).

The native of Aiken, SC combined with Billy O’Dell to lead Clemson to the 1954 ACC Championship, the first ACC championship in Clemson athletic history. He was inducted into Clemson’s athletic Hall of Fame in 1985.

Kingsmore’s ties to Clemson date to a North Carolina vs. South Carolina high school all-star baseball game in 1950. Walter Cox, who later became president of Clemson University, was the head baseball coach at Clemson at the time and served as coach of the South Carolina High School All-Stars. “I was going to go to Miami (FL) to play baseball or Newberry College to play football,” remembered Kingsmore. “But,we formed a strong bond that week and Coach Cox offered me a partial scholarship to Clemson.

“Aside from baseball, that decision to come to Clemson led to a strong education in industrial management, and even more important, provided me with the opportunity to meet my future wife.” Kingsmore is married to the former Vicki Heard .

Kingmore played three years of professional baseball in the Baltimore Orioles organization before beginning a successful business career. He is currently president of Two Tigers Holding, LLC * Kingsmore Enterprises. For many years he was president and chief executive of the Graniteville Company in Aiken. He is serving in his third term on the Clemson University Board of Trustees and will become Trustee Emeritus when his current elected term expires in 2002.

“We are very appreciative of the gift Mr. Kingsmore has made to the athletic program,” said Athletic Director Bobby Robinson. “It is especially meaningful coming from a former athlete who is also a member of the Clemson Board of Trustees.

“Mr. Kingsmore’s generous gift will enable us to make the baseball facility one of the finest in the nation. Doug Kingsmore Stadium will be a tremendous facility for our student-athletes to play and for our fans to watch a game.”

“I can’t tell you how excited I am about this announcement,” said Head Coach Jack Leggett. “This will be a great lift to our program. Everyone in our program is appreciative and it means so much come from a former Clemson baseball player, and a man who has meant so much to Clemson University.”