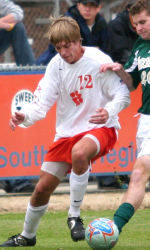 CLEMSON, SC–The Clemson Men’s Soccer Team will play host to Creighton in the quarterfinal round of the NCAA Tournament on Friday night at 7:00 p.m. at Historic Riggs Field.

Creighton has a 15-4-3 record overall and has won seven straight matches coming into the Clemson game.

Tickets for the Clemson-Creighton match are on sale now at the Clemson Athletic Ticket Office in the northwest corner of the Memorial Stadium. Ticket prices are $10.00 for adults and $5.00 for Clemson and Creighton students and high school age and under. The ticket office hours are 8:00 a.m. until 4:30 p.m. They will also be on sale at Historic Riggs Field on the day of the game beginning at 5:30 p.m.