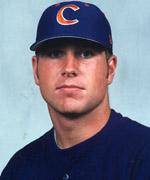 Clemson, SC- Clemson pounded out 15 hits in a 9-2 victory over Virginia on Sunday at Doug Kingsmore Stadium. Clemson won two of the three games against the Cavaliers and evened up its conference record. With the win, the 15th-ranked Tigers improved to 23-7 on the year (3-3 in the ACC). The Cavaliers dropped to 20-10 overall (6-5 in the ACC).

Steven Jackson (4-1) was credited with the win. Jackson, who has won his last three decisions, pitched 5.0 innings of shutout ball and gave up just three hits. Matt Avery (1-2) got the loss for the Cavaliers.

Clemson jumped out to a 1-0 lead in the bottom of the second inning. McCann led off by reaching on a fielding error by Cavalier shortstop Mark Reynolds. After stealing second, McCann scored on a single through the right side by outfielder Ryan Hub.

The Tigers tacked on two runs in the third after McCann slapped the first pitch he saw from Avery through the left side to plate Zane Green and Russell Triplett. Clemson was robbed of two additional runs when Virginia left fielder Matt Dunn caught what appeared to be Hub’s fourth home run of the year at the fence.

Virginia reached the scoring column in the sixth after Joe Koshansky hit a sacrifice fly to left field to score Matt Street. The run was scored off of Tiger reliever Brett Murphy, who took over for Jackson.

Clemson responded by stretching its lead to 4-1 in the bottom of the sixth. Everett hit a double down the left field line that scored Herman Demmink from first. Everett continued his damage in the seventh when he hit a two-run single to right field. David Slevin followed that up with another RBI single, making the lead 7-1 in favor of the Tigers.

The Tigers padded the lead with two additional runs in the eighth inning.

Clemson next plays at Furman on Tuesday, April 8. The game will be broadcast by Clemson Tiger Sports Properties and live stats will also be available on the Internet. First pitch is scheduled for 7:00 PM.