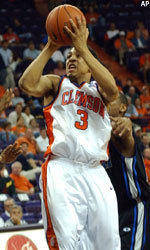 Sharrod Ford added 16 points and Vernon Hamilton scored 12 points and had six steals for the Tigers (2-0), who have beaten the Bulldogs in all seven of their meetings.

Clemson used its size, outscoring North Carolina-Asheville 40-22 in the paint and pulling down six more rebounds.

Bryan McCullough had a team-high 12 points and six rebounds and K.J. Garland added 10 points for the Bulldogs (0-2).

The Tigers were leading 18-11 when Robinson’s free throw was the first of 18 straight points in a four-minute span midway through the first half.

Hamilton scored nine points during the run which included a technical on the Bulldogs’ bench and an intentional foul.

North Carolina-Asheville would never get closer than 13 points the rest of the way even though Clemson had a six-minute scoring drought in the second half.

But Clemson continues to be plagued by mistakes, turning the ball over 19 times, 12 of them in the second half. The Tigers did force 23 turnovers.

Clemson played the game without forward Olu Babalola, who was suspended indefinitely on Tuesday by coach Oliver Purnell for conduct detrimental to the team.