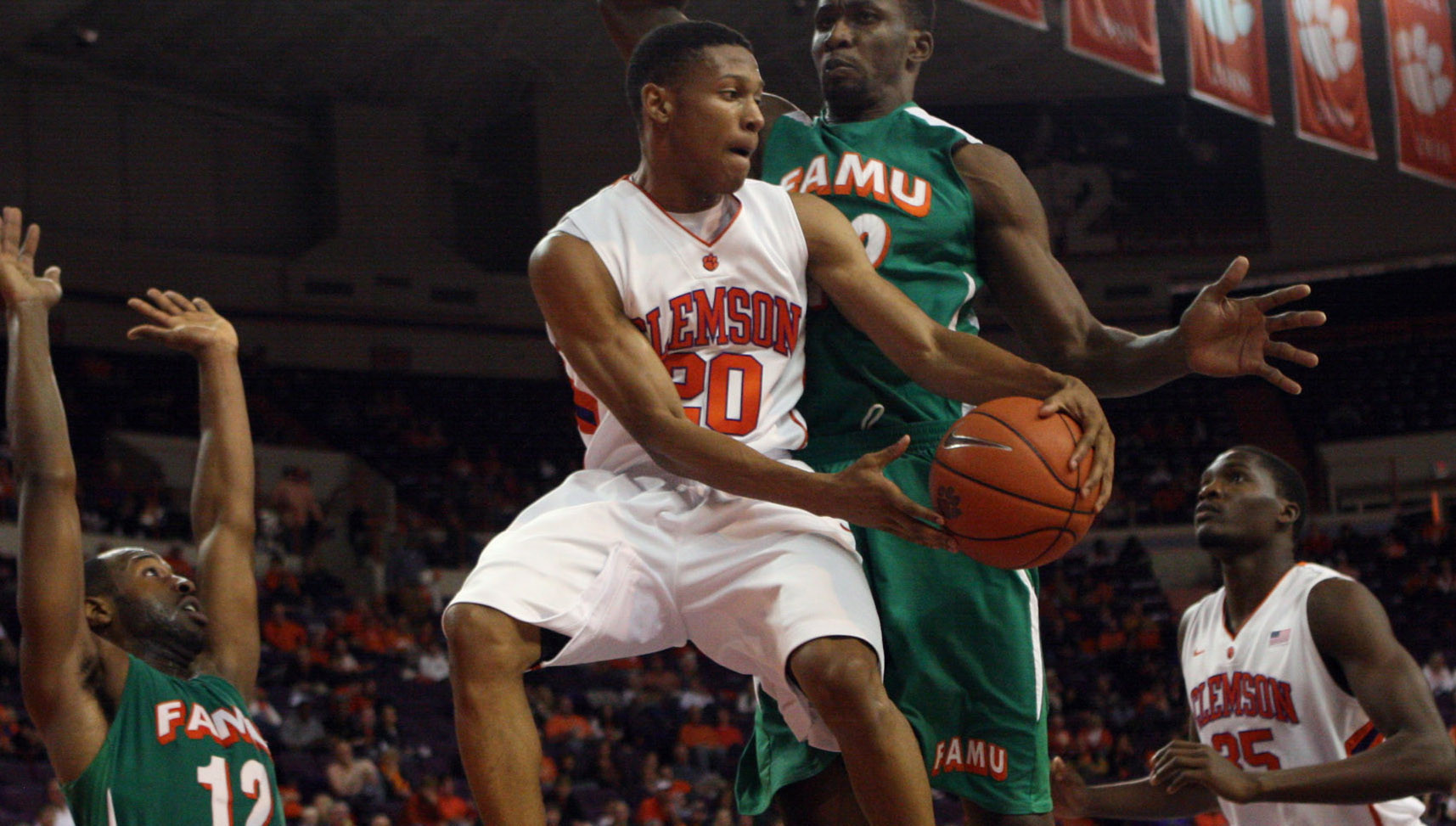 CLEMSON, SC – Clemson put together a 16-2 run coming out of the halftime break and pulled away to an easy 80-57 victory over Florida A&M on Saturday at Littlejohn Coliseum. The Tigers, coming off a week off due to final exams, improved to 6-3 on the season. The loss dropped the Rattlers to 4-7 overall and 0-6 on the road.Jordan Roper, a freshman guard out of Columbia, SC, led the Tigers in scoring in his first career start. He posted a season-best 16 points, a high in 2012-13 for any Clemson newcomer. Roper buried 5-of-8 field goals overall, including 4-of-5 from three-point range. He also added three steals. Three other players reached double figures for Brad Brownell‘s team: Adonis Filer (14), Devin Booker (12) and K.J. McDaniels (11). Starting point guard Rod Hall collected a career-high 10 assists, while senior Milton Jennings added a season-best 11 rebounds in just 27 minutes.The Tigers shot 52.6 percent from the field on their way to a season-high 80 points. Clemson made 30 of 57 field goals, including 5-of-17 from long range. Clemson shot 15-of-22 at the charity stripe and enjoyed a +17 advantage on the boards. Conversely, FAMU shot just 31.8 percent overall and was outscored in points off turnovers by Clemson by a 22-10 margin. Clemson led 41-31 at the break, despite 19 points in the opening half from FAMU guard Reggie Lewis. He finished the game with 26 points and made 6-of-8 from three-point range. After a three-point play on a one-handed alley-oop dunk from Hall to McDaniels gave Clemson a 26-15 advantage, the lead quickly narrowed to three on a layup by Muhammad Abdul-Aleem and back-to-back trifectas by Lewis. Holding a 26-23 lead, Clemson responded with a 6-0 run that included a pass from Hall off the glass to a trailing McDaniels, who emphatically slammed it home.The Tigers stretched their lead to 57-33 by converting on their first six field goal attempts of the second frame. Roper hit a pair of long-range shots in the run, while Booker got loose against the smaller Rattlers inside for a pair of baskets as well. Clemson was able to empty its bench in the second half, as all 11 players that dressed played at least eight minutes. Damarcus Harrison came off the bench to grab a career-best eight rebounds, while sophomore Bernard Sullivan returned to action after missing the last game due to a concussion. The Gastonia, NC native made a pair of jumpers and added three rebounds and two steals in 13 minutes.The Tigers return to action Wednesday, Dec. 19 at Coastal Carolina. The Chanticleers won last year’s game in Clemson, 60-59, on a tip-in as time expired. The game is set for 7:00 PM at the HTC Center in Conway, and will be streamed live on ESPN3.