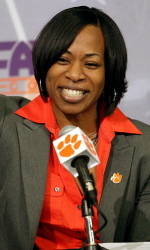 CLEMSON, SC – Clemson Athletic Director Terry Don Phillips announced the hiring of Itoro Umoh Coleman on Monday as Head Coach of the Women’s Basketball program. Coleman, a 2000 graduate of Clemson who was named to the ACC’s 50-Year Anniversary Team in 2002, returns to Clemson after three years as an assistant coach and recruiting coordinator at Penn State.

“When you look for someone in a leadership position, you look for someone who is a wonderful fit for your program, and Itoro is an excellent fit for this program,” said Phillips. “She loves her university. We are delighted that Itoro is with us, and we look forward to many years with her. Itoro was the individual that we wanted to come and lead this program back to where it was, and we are so delighted to have her here.”

“I am very passionate about reestablishing a winning tradition for the women’s basketball program. This is something I take very personally, because I am a product of this university,” said Coleman. “I want every Lady Tiger to have as great an experience as I did when I was here. I am committed to being the best, and I plan to work extremely hard to bring out the best in my players. I want to bring that same type of consistency and direction to the women’s basketball program. There is no staff that is going to out work my staff. There is no team that is going to outwork my team.”

“Just knowing what Itoro can bring to the table, knowing her passion for Clemson University, for Clemson athletics, her passion for young people, and developing young people to be the best that they can be academically, athletically, and as individuals,” said Barbara Kennedy-Dixon. “We have before us a very driven Clemson family member to come and take over our program, and to be competitive in the conference as well as beyond.”

Coleman has posted a strong reputation for recruiting and player development. While at Clemson, she helped Chrissy Floyd and Lakeia Stokes to Kodak All-America honors.

Recruiting is also a strength, as she was instrumental in bringing All-ACC performer Lele Hardy to Clemson four years ago. Hardy went on to finish her career fifth in school history in scoring, third in rebounds, and in the top-25 in Division-I history with 398 steals.

As recruiting coordinator, she oversaw the efforts of bringing in the 20th-ranked class nationally to Penn State for 2010, which included Parade All-American and top-50 player Maggie Lucas. Her last two classes were both ranked in the top-20 by ESPN HOOPGurlz.

Coleman also pursued a professional basketball career and became the first Lady Tiger named to a WNBA active roster in 2000-01.

As a player at Clemson, she led the Lady Tigers to a pair of ACC Tournament championships as the team’s point guard. Clemson won the conference title her freshman year, 1995-96, and her senior year, 1998-99. She was the tournament’s MVP as a senior, in addition to a first-team All-ACC selection. That same season, she was an honorable mention AP All-American. She was selected to the ACC’s 50-Year Anniversary team in 2002, one of just four Clemson players honored by the conference. Coleman still ranks 11th in Clemson history in scoring (1,409 points), fourth in games played (127), second in free throws made, third in assists, and first in assist-to-turnover ratio (1.73).

Clemson had a record of 93-33 in her four years as a player, the most wins in Clemson history for a senior class. Her senior class won the only two ACC Championships in school history, played in four NCAA Tournaments, including one Sweet 16 season, and all four of her teams were ranked in the final top-25, including a final #10 AP rank in 1999. She was inducted into the Clemson Athletic Hall of Fame as a player in 2008.

Coleman, the former Itoro Umoh, is married to Harold Coleman, and the two have two children, Jada (5), and Jordan (5 months).