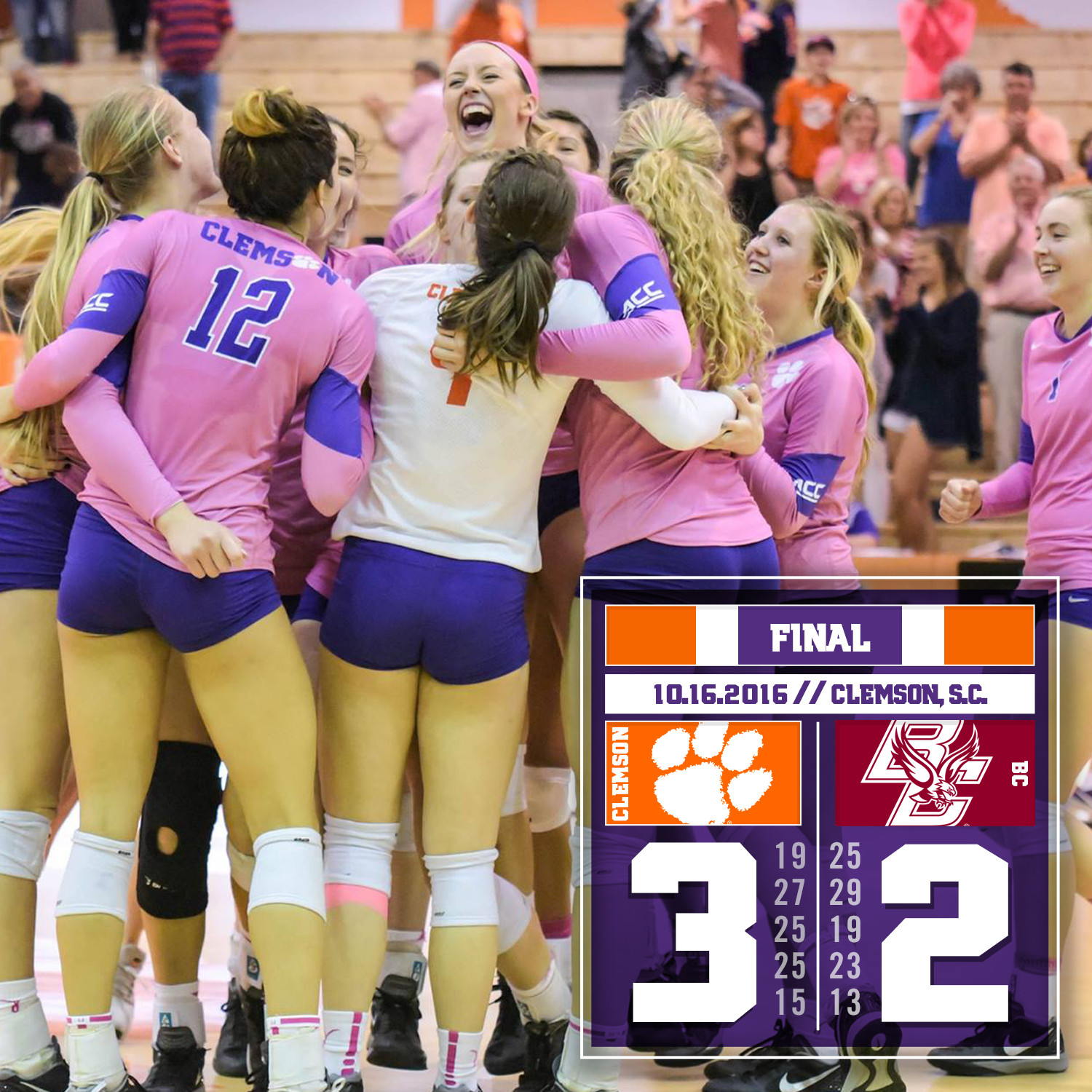 After the Tigers jumped out to what looked to be a secure 10-5 lead in the fifth set, the Eagles surged with a 7-1 run to take a 12-11 lead, forcing a Clemson timeout. On the ensuing play, Boston College nearly aced the Tigers but Keely Hayes was there, colliding with Clemson’s bench to save the ball with one hand, well enough for an off-balanced Perri to drive it deep into Boston College’s back court, tucking it within inches of the end line. The point immediately switched the momentum of the match back into the hands of Clemson, ultimately leading to Harvell’s dagger to seal the victory, 15-13.

“I’m proud to see our team grow today,” said head coach Hugh Hernesman. “We consistently put ourselves in a position to win sets and today we found a way to close it out. The difference I saw today was our girls were taking aggressive, confident swings following point 18 of each set. We had great balance offensively, it was good to see contributions all the way around. We had high kill numbers out of Leah, Kailey and Annie (Carter) and efficiency out of Tori (Woogk) and Megan (McGinley). Then you get eight blocks out of Jaden (Light) and lastly you have to give a lot of credit to Keely (Hayes) and Taylor (Daniel) for allowing us to out-hit Boston College by over 100 points.”

“After losing the second set and going into the break we talked to the team about how we felt we were in control of the second set, minus the unforced errors. Our message to them was that those errors were going to find a way of balancing out and if we just stuck with how we were playing that good things would happen. You have to give them a lot of credit for keeping that faith and going out and executing the way we did to comeback from 0-2.”

Harvell and Perri’s clutch plays down the stretch only highlighted impressive and nearly identical stat lines for the two pin hitters. They each finished with 14 kills, 11 digs and two blocks on the afternoon however Perri came through with a clutch ace to claim point 14 for the Tigers in the fifth set. Harvell narrowly bested Perri in hitting percentage, hitting .273 while Perri hit .270. Carter wasn’t far behind the duo with 12 kills of her own, complemented by seven digs and three blocks. The three Tigers each led the match in points with Perri finishing with a match-best 16. Harvell tallied with 15 points while Carter earned 13.5.

Complementing their efforts were Woogk and McGinley as each turned in very efficient efforts offensively. The two underclassmen each finished with seven kills with just one error between them. McGinley was errorless with a .412 hitting percentage while Woogk hit .375. McGinley denied the Eagles on five of their attempts as well with Woogk contributing three blocks of her own. Leading the blocking effort however was Jaden Light as the freshman led the match with eight on the day. All-together, Clemson out-blocked Boston College, 13-5.

Orchestrating the offense to its efficient performance was Hayes and Daniel, with Hayes leading the match with 33 assists to go along with her two service aces and six digs. Daniel finished with 19 assists, an ace and five digs. Defensively, Emily Curtis still managed to dig 10 balls despite the Eagles hitting away from her all afternoon.

Next week, the Tigers begin a three-match stretch of away contests with their first test awaiting them in Durham, North Carolina. Duke and Clemson will square off on Friday, October 21 at 6:30 p.m., before the Tigers head to Winston-Salem, North Carolina to take on Wake Forest at 1:00 p.m., on October 23.