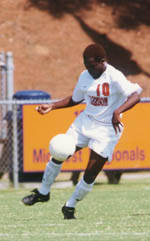 GREENSBORO, N.C. – Deliah Arrington, a sophomore forward for the Clemson Tigers, has earned the third ACC Player of the Week honor of the 2000 season. A native of Pawleys Island, S.C., Arrington scored the game-winning goal as No. 4 Clemson defeated No. 1 North Carolina 2-1 on Sept. 13. It was Clemson’s first win over the Tar Heels since the program began in 1994. Arrington followed that performance by scoring two goals against Western Carolina in a 4-0 shutout on Sept. 17.

Arrington has started in all of Clemson’s eight games and has contributed five goals and four assists in the team’s undefeated campaign. She led the Tigers in scoring last season as a freshman, scoring nine goals and making seven assists for 25 points.