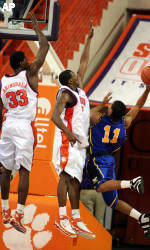 CLEMSON, S.C. (AP) – Clemson opened the second half with a 24-9 run and went on to post a 102-71 victory over Coppin State in a non-conference game Monday night at Littlejohn Coliseum.

Clemson (2-0) was led by Akin Akingbala with 19 points, 14 rebounds, three assists, and three blocks. Following Akingbala for the Tigers were James Mays with 18 points and four blocks, Vernon Hamilton with 15 points and eight assists, and Shawan Robinson with 10 points and five assists.

“I was much more pleased with our approach in the second half,” said Clemson coach Oliver Purnell. “We came out with good energy and did a much better job on the backboards.”

The loss drops Coppin State to 0-4. It was Clemson’s second straight victory over a school from the Mid-Eastern Athletic Conference.

“Inside has been our weakness this year, and Clemson was strong and physical,” said Coppin State head coach Fang Mitchell. “We didnt go up and try and get any rebounds. We did a lot of watching.”

Darryl Roberts was Coppin State’s leading scorer with 23 points. He was followed by Talmadge Bell with 17 points. Bell was 5-for-8 from 3-point range.

Clemson’s 102 points is the most scored against Coppin State since Oklahoma scored 100 against the Eagles on Dec. 16, 2000.

The Tigers used their size advantage to dominate inside. Clemson scored 60 points in the paint while Coppin State managed just 24 inside points.

Clemson used relentless full-court pressure to build a 15-2 lead five minutes into the game. The Tigers jumped out to an 8-0 lead in the first three minutes of the game.