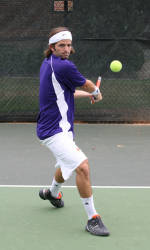 The Tigers have an 8-6 record overall and a 0-3 mark in the ACC. This will be the 58th meeting between Clemson and Virginia on the tennis courts. Clemson leads the overall series 41-16. The series began in 1955.

When Clemson and Virginia Tech meet on Sunday, this will be the 12th meeting on the tennis courts between the two schools. Clemson leads the series 8-3. The series began in 1969.