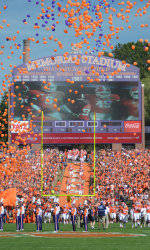 CLEMSON, SC – Clemson Memorial Stadium has been ranked as the best football stadium in the nation by BleacherReport.com, an internet site that covers college football and is known for its rankings in various areas of the game.

Below is how the website characterized the stadium in its review of all 124 Division I stadiums:

“Known nationwide as “Death Valley”, this venue is the best place in the country to enjoy a college football game. It seats 80,301 and was built in 1942. The stadium will be filled with orange as the crowd loves to support their Tigers.

“There are not many fans in the country that are more passionate about their team than this group. When Clemson is playing well and the game is going well, the noise in here is as loud as it gets in college football.”

Memorial Stadium was a great home to the Tigers in 2011 as Clemson and Head Coach Dabo Swinney posted a perfect 7-0 record at home and out-scored their opposition 277-180. Clemson’s home victims in 2011 included defending National Champion Auburn and 11th ranked Florida State, victories that helped the Tigers gain momentum on the way the ACC Championship in December.