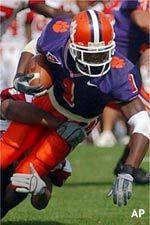 The Wolfpack (4-4, 3-3 Atlantic Coast Conference) drove the ball to the Clemson 12 with eight seconds to go. But on fourth-and-10, Jay Davis threw his fifth interception of the game to defensive end Charles Bennett as the clock ran out.

Clemson’s defense came into the game having forced just six turnovers all season.

Jad Dean’s made all four of his field goals for the Tigers (4-4, 3-3) and ACC leading receiver Aierse Currie had seven receptions for 108 yards.

N.C. State outgained Clemson 381-267. But mistakes doomed the Wolfpack, who came into the game ranked 110th out of 117 teams in turnover margin.

Eric Coleman returned one of Davis’ picks 20 yards for a score. Justin Miller also had two interceptions for Clemson, including one in the end zone with 3 seconds left in the first half.

The Wolfpack also had two touchdown passes on the same drive called back for illegal formation penalties.

N.C. State lost one fumble and appeared to have lost the ball twice more, but the officials called the plays dead.

Clemson’s Charlie Whitehurst was 14-of-33 for 183 yards, continuing what has been a disappointing junior season for a player who had six 300-yard passing games in his first 17 starts.

Davis was 24-of-45 for 255 yards for the Wolfpack, while freshman Darrell Blackman ran 11 times for 90 yards, filling in for T.A. McLendon, who left the game in the first half with a bruised shoulder after carrying the ball 12 times for 31 yards.

John Deraney made both his field goals for N.C. State, while running back Reggie Davis scored both touchdowns for the Wolfpack – one on a 10-yard run and the other on a 5-yard catch.