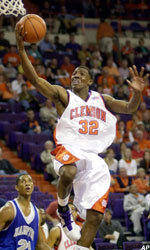 CLEMSON, S.C. – Shawan Robinson scored 22 of his 26 points in the first half and led Clemson to its 20th straight season-opening victory, 98-54 over Hampton on Friday night.

Robinson was 6-of-6 from behind the arc in the opening half and the Tigers set a school record with 25 steals to start the season with a crowd-pleasing blowout at Littlejohn Coliseum.

Outside shooting and turnovers were two of Clemson’s biggest problems a year ago. The Tigers were last in the Atlantic Coast Conference in field-goal shooting, 3-point shooting, forcing turnovers and giving up turnovers. All were a point of emphasis this fall as coach Oliver Purnell prepared for his second season.

On the turnover front, Clemson forced 37 – its most since Auburn coughed the ball up 36 times in 1973. Vernon Hamilton led in steals with five, as the team surpassed the old record of 20, which was accomplished twice – against Georgia Southern in 1976 and Western Carolina in 1998.

Jeff Granger led Hampton with 16 points. The Pirates of the Mid-Eastern Athletic Conference finished the game shooting 33.3 percent (14 of 42).

Robinson got the Tigers out of the blocks fast, hitting his first three 3-pointers, then they pressured Hampton out of the building.

Jared Woodley’s 3-pointer brought Hampton to one point down at 11-10, but the Tigers set out on a 22-0 nothing run. The Pirates committed eight turnovers during that spurt and Clemson was up 33-10 on Steve Allen’s close-in shot.

Hampton was held without a basket for 10:18 of the first half. By the time Adrian Woodard’s jumper went through, the Pirates trailed 45-18.