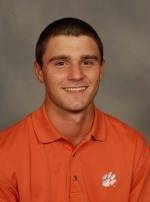 Kyle Stanley, a junior from Gig Harbor, Washington, is one of Clemson’s greatest golfers of all time. He is currently second in school history in career stroke average with a 71.66 average, just below the 71.49 figure achieved by D.J. Trahan from 1999-03.

Born and raised in Washington, Stanley first picked up a club when he was around the age of five. He followed his father to the range and hit balls at that young age. He started playing competitively when he was 11.

In high school, Stanley won four AJGA (American Junior Golf Association) events. He was also named the Washington Junior Golf Association Player of the Year that same year. At Bellarmine Prep he was named the Bellarmine Prep Male Athlete of the Year in 2006. He also helped his high school team win State Championships in both his junior and senior years by finishing second overall in both tournaments.

It may seem odd that Stanley chose to come to school about 3,000 miles away from Washington, but he has what he calls, “a second mom and dad,” that live in Hilton Head, so the south felt like home. “Clemson has been one of the best teams in the country for a while and I knew a lot about the program,” said Stanley. “I certainly took notice when Clemson won the national championship in 2003, so when I was visiting with family in Hilton Head, and went on some college tours, Clemson felt like a good fit for me.”

Last season Stanley again made first-team All-ACC, honorable mention All-American and led the Tigers to a number-five national finish at the NCAA Tournament at Purdue University. He was seventh in the individual race at the NCAA national tournament. So far this year, he already has a victory under his belt at the Carpet Classic in Dalton, GA against a national field and won the Jones Cup Amateur event in dramatic fashion when he overcame a four-shot deficit on the back nine. He is currently ranked third in the Golfweek World Amateur rankings and seventh in the Division I college rankings.

When asked about his goals for this spring, he speaks of the Clemson team goals. “We just want to put ourselves in a position to win tournaments. In the back of our minds those post-season events are really important like ACC, Regionals, and Nationals, and we would like to show improvement in those tournaments.”

In the summer of 2008, Stanley became the second Clemson Tiger to play in the US Open (Chris Patton 1990). It was a great experience, but disappointing at the same time. With a birdie on the last hole on Friday, he thought he had made the cut. All that was needed was for Stuart Appleby to par the 18th.

“I was on the range watching the big jumbo-tron hitting balls. Stuart was struggling on the 18th hole. He hit a poor drive and had to lay up because it was a par five. Then he hit his approach shot, his third shot, 40 feet from the hole, so it was unlikely that he would make that putt to knock me out. Sure enough, he rolled it in and knocked me out. I just tossed my club at the bag and headed for home.”

But after that heartbreaking experience at Torrey Pines, Stanley gets another shot at a professional event this weekend when he plays in the Arnold Palmer Invitational at Bay Hill Golf Club in Orlando, FL. He qualified for the event by winning the Southern Amateur this past summer. It will be his second appearance at this event, as he also qualified by winning the 2006 Southern Amateur. Stanley will join Chris Patton as the only active Clemson golfers to play in at least three PGA Tour events while still a Clemson student.

The Arnold Palmer Invitational attracts a top field, including Tiger Woods. Stanley had a poster of Woods in his room growing up in Washington, and now he will play in the same tournament with him. “I have great respect for Tiger Woods and Vijay Singh and many others because I have seen their work ethic. They really put a lot of work into being the best and that has been a positive effect on my work ethic.”

Stanley’s work ethic at Clemson is legendary. Many times over the last three years Clemson Coach Larry Penley has met Stanley out on the golf practice range behind the Clemson football practice fields for night time practice that can go until midnight. “I have never had a player with such a work ethic,” said Penley, who has been Clemson’s head coach since 1983. “That has been a big key to his success. He has outstanding talent, but he has the work ethic to go with it.”

Next year Kyle Stanley plans to make the leap to professional golf. He hopes to receive exemptions to seven tournaments and see if he can qualify for the 2010 tour without going through Q-school, but that is a difficult task. “I do plan to turn professional after this year, but until then I am focused on this Clemson golf team and doing everything we can do to compete for the conference and NCAA championships. It should be an exciting spring.”