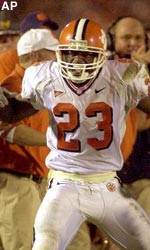 Aaron Hunt On how the win feels “It feels great.”

On being called a hero “I am not a hero – it was a team effort.”

Rod GardnerOn the last drive “I just told the coach to throw it downfield and let me make a play.”

On the closeness of the game “It was in front of 85,000 fans and it was just unbelievable.”

On the catch “Once they scored I knew I had to make a play and once I made the catch I knew it was over. There was no way (Hunt) was going to miss the kick.”

Keith Adams “We never thought we would lose the game.”

On the rivalry “It is a great rivalry. South Carolina played hard. They played a great game. We knew we were going to have to come out and play hard. I am thrilled for our seniors because this was their last game at home. Since it is an in-state rivalry, you have got to live with the game 365 days. For our seniors to come out and win with a bang, that was great.”

Robert CarswellOn the defense “We had one breakdown but we fought hard. Our main goal of the day was to send our seniors out with a win and this makes four straight wins over South Carolina.”

Chad CarsonOn the win “What a win! It has been a long time coming for us. We have lost games like this on the last play. South Carolina made some great plays and we did as well. It was a real hard-hitting game.”

On the field goal “Aaron really had the eye of the tiger. He has had a tough year, but he really stepped up today. I was really proud of him.”