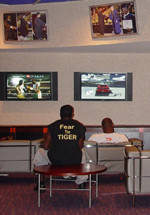 Take A Virtual Tour of the Locker Room

When Clemson’s football players returned to campus for the second session of summer school in 2004, they reported to a new football locker room and player lounge area within the Jervey Athletic Center.

The 4200-square-foot facility has all the modern conveniences, including a player lounge that includes seven plasma televisions and four computer work stations.

The lounge also features murals that document Clemson’s greatest players, greatest victories, and prominent former players who have gone on to the NFL.

The following is a rundown of the some of the features of Clemson’s new lounge and locker room: