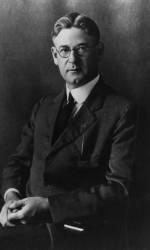 The common ties of Auburn and Clemson date to the birth of the Clemson football program. The founding father of Clemson football was Walter Merritt Riggs, a former Auburn athlete who had come to Clemson as an engineering professor in 1896.

While at Auburn, Walter Riggs played football under Auburn’s first head coach, Geoff Petrie, and was also captain of the Auburn baseball team in 1892, president of his senior class, and director of the Auburn Glee Club. He had been an assistant to the president at Auburn until 1896, when he came to Clemson.

Riggs’ talks with Clemson students about his football experiences at Auburn stimulated interest to the point that a meeting was held on September 30, 1896 at one of the barracks on campus for students interested in forming The Clemson College Football Association.

At the time, Clemson had nearly 600 students and 30 of them came to the meeting interested in forming a team. The first meeting elected an organization president, Frank Tompkins, who was the only person at the meeting who had ever seen a football game. The group elected Charlie Gentry as secretary/treasurer, T. R. Vogel as team manager, and R.G. Hamilton as temporary captain. A committee of three was formed to consult Riggs about becoming the team’s coach.

Riggs was more than willing to take on the challenge and agreed to coach the team for free. He called the team’s first practice on October 5, 1896 on a field in front of one of the main barracks in the middle of campus. The area is now the land between Tillman Hall and the old Trustee House, a structure that is now the home of the Clemson University Media Relations Office.

Practice continued, and as one description put it, “A hardy group of early Tigers who cared little for their skin and bones turned out for practice and began enthusiastically slamming each other to the rock-hard ground.”

In what must be regarded as a very bold move (in retrospect) by Riggs, he put together a three-game schedule for 1896, including a contest at Furman that was played just 26 days after the first practice. When the 21 players on Clemson’s first team traveled to Greenville to meet Furman, it was the first time any of the players had seen a regulation football field, because Clemson had practiced on a field just 50′ x 200′ in size.

The team colors for the first game were (according to one account) purple and gold, the same colors used by Auburn when Riggs played there just four years previously. The team wore orange and black-striped socks, resembling Tiger stripes, and that led to Clemson’s true nickname, which was formally adopted two years later.

Clemson recorded a 2-1 ledger that first season. Riggs stepped down after that initial season, because he wanted to devote his full time to his work as a professor in the engineering department. He brought in W.M. Williams to succeed him as head coach for the 1897 season.

Williams had been a player on the Auburn teams of 1894, 1895, and 1896 under John Heisman, and Riggs believed he had the experience to lead Clemson. He coached Clemson to a 2-2 record in 1897, but most importantly, he defeated South Carolina for the first time, an 18-6 victory that allowed Clemson to claim the state championship.

John Penton, the third straight Auburn graduate to lead the Clemson football program, took over the coaching duties for the 1898 season. He guided Clemson to a 3-1 record, with the only loss coming in the season-opener against Georgia. The Tigers defeated South Carolina for the second straight year, a 24-0 win on November 17, and finished the season with a 23-0 win over Georgia Tech in a game played in Augusta, GA.

At the end of the 1898 season, the football association was strapped for money and could not afford to pay Penton. Riggs came to the rescue of a program he founded and agreed to coach the 1899 team for free, the second time he directed the program without any remuneration.

Clemson got more than its money’s worth in 1899 with a 4-2 record and fourth straight state title. Clemson won its last three games by a combined score of 99-5, including a 34-0 win over South Carolina. One of the losses was a 34-0 defeat at Auburn, coached by Heisman.

The program was on sound footing in terms of talent, having posted a 7-3 record over the last two years, but Riggs did not have the time to coach the team and needed to raise some money to secure a coach.

Riggs was a man with high expectations. He had gone to Auburn to hire former players Williams and Penton in 1897 and 1898, but this time he had his eyes on an Auburn man with coaching experience in Heisman, who had led Auburn to a 12-4-2 record in the previous four years.

In the beginning of what would be a great heritage of fundraising by the Clemson athletic department, Riggs formed the Football Aid Society and raised $372.50 through the contributions of 132 different people. He used that money to entice Heisman to make the 225-mile trip to Clemson from Auburn. On December 8, 1899, he was hired as Clemson’s fourth head coach.

Heisman was the first Clemson head coach with any previous experience and he had the reputation, even at that young age (30), of an innovator. He played the game at Brown and Pennsylvania, and he led Oberlin to an undefeated season in his first year out of school (1892).

Heisman provided Clemson with an athletic foundation during his four years. Clemson had a 19-3-2 record, as the 83.3 winning percentage is still the best in school history among coaches who have guided the program for at least four years. That record included a 6-0 mark in 1900, his first year, and a berth in the 1903 Championship Game of the South against Cumberland.

Heisman went to Atlanta to coach at Georgia Tech for more money in 1904. At the time, Clemson was 30-9-2 (.756) in its first eight years of football. In all eight seasons, Clemson had been coached by an Auburn graduate or by someone who had coached at Auburn.