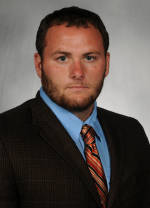 Thomas Austin describes his greatest strength as being able to adapt to different situations and handle whatever is thrown his way. He has shown his ability to succeed and be a leader throughout his time at Clemson, regardless of the challenges he has faced.

Austin has done well at adapting to a variety of situations and handling an array of responsibilities during his time as a Tiger. One of his most important aspects of being a college athlete is being able to juggle those responsibilities while maintaining his priorities.

“People often think that what we do on Saturdays is what we do all of the time,” said #65. “But we have a lot going on in our lives outside of football.”

This rings especially true for Austin, who in addition to football and academics is the only married player on the 2009 squad. It has been a challenge for him to find time for everything while living the busy life of a student-athlete.

“One thing that is always tough is keeping your priorities in line,” explained Austin. “Number-one with me is my faith, my relationship with Christ, and making time for bible study and things like that. Number-two is my family, especially with my wife Margaret and setting aside time for us. Then academics and football…those go hand in hand.”

Austin has been able to adapt and find time for each important aspect of his life. When it comes to his top priority, his faith, Austin leads by example. He has dedicated a great deal of time to being a good Christian and has been involved with bible study with his teammates.

Fellow offensive lineman Cory Lambert credits Austin with his spiritual growth. “Thomas has really influenced me both spiritually and emotionally. He’s definitely a brother that I will hold in my heart forever.”

While most college students spend spring break relaxing and enjoying a week away from the demands of school, Austin has spent three of his spring breaks during college taking part in mission trips. In 2008, Austin traveled to Acapulco, Mexico to volunteer at the Casa Hogar orphanage. He helped with construction and spent time with orphans, which was a very rewarding experience for him.

“I feel that because God has blessed us, we are then called to give back some of our time and efforts to help those who are less fortunate. I am passionate about my faith in Jesus Christ and that alone compels me to help others.”

Adapting to the role of being a husband has been a challenge, but the couple has come to embrace the role of mom and dad to many of the players. Austin and his wife have often invited teammates over to their house for dinner, and she has become comfortable in her role as a football player’s wife.

“I love having her around the guys and seeing her interact with them and seeing her heart for them,” said Austin. “She’s become like a `team mom’…it’s very cool. It’s one of the things that attracted me to her when we were dating. She’s very stern with them, but she also cares about them.”

The couple tied the knot on July 5, 2008 and has enjoyed married life ever since. They have faced challenges balancing their time together, especially with the hectic schedule that he has as a student-athlete.

“We have learned the importance of quality time over quantity time and to make the time count,” he explained.

Despite his busy schedule, Austin has also found great success academically. Last season, he garnered All-ACC Academic honors, and he has been a regular member of the academic honor roll since his arrival in Tigertown.

After earning his degree in political science in August, Austin has adapted to a new role this semester as a teaching assistant for Political Science 101. He attends lectures on Mondays and Wednesdays, and he is responsible for leading a discussion and administering quizzes in a lab on Fridays. So far, Austin has enjoyed his new role as a teacher.

Not only is Austin a leader in the classroom, he is also a leader for the team. He is the undisputed leader of the offensive line and is highly respected by his teammates.

“Thomas is a real leader on this team, and he is a guy who will be a captain here,” said Head Coach Dabo Swinney.

During his senior season, Austin has adapted to an even greater leadership role, a position that he is fond of.

“There is a lot of pressure, which I embrace,” admitted Austin. “My role has shifted over the past couple of years. Now, Chris Hairston and I have been able to bring some of the younger guys in to watch film without the coaches and teach them film study and how to prepare for a game and to coach them up.”

Austin embraced an increased leadership role this summer, a time during which the coaching staff is not able to be as involved due to NCAA rules. The ever-dependable Austin stepped up and approached the strength & conditioning staff about helping with the team’s workouts.

“This summer, Joey Batson and the strength staff allowed us more input and allowed us to take more control and lead more drills,” recalled Austin. “It increased the leadership of the team and the cohesion on the team. It’s a role that I really enjoyed.”

On the field, Austin has been one of the most dependable and hard-working offensive linemen over the past few seasons. He was the line’s top backup during his red-shirt freshman season, then he started 12 games as a sophomore, four at guard and eight at center. In 2008, he was the only Tiger offensive lineman to start all 13 games. Throughout his career, he has won five ACC Offensive Lineman-of-the-Week awards, which ties him for third-most in school history and tied for most among offensive linemen.

Austin again demonstrated his ability to adapt when he was called on to switch positions earlier in his career. He started his career as a guard but was moved to center during his sophomore campaign. He stayed at center for half of his junior year before moving back to guard midway through the season. A team player, Austin was willing to step away from his natural position of guard in order to help the team succeed.

Of course, being versatile certainly does not hurt his NFL prospects. With 45-player rosters in the NFL, the league puts a priority on offensive linemen who have experience at more than one position.

The future looks bright for Austin, who is rated as the top center in the upcoming NFL draft by ESPN’s Mel Kiper. However, Austin has remained humble about his future on the gridiron.

“I’d love to give the NFL a shot if I get an opportunity,” stated Austin, a candidate for the Outland Trophy in 2009.

If the NFL does not work out, Austin believes that the Lord has something else planned for him and his wife. Whatever path he chooses to take, he has proven during his time as a Tiger that he will be able to adapt and succeed with whatever is thrown his way.