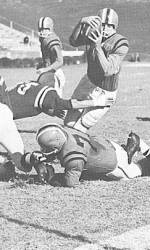 It was about this time 50 years ago that my attempt to publish a semi-monthly magazine (The South Carolinian) fell short, and I accepted a job as Strom Thurmond’s press secretary. With Congress in recess, I worked out of my home and Thurmond’s while visiting every newspaper, radio station, and television station in the state’s 46 counties along with Asheville, Augusta, Charlotte, and Savannah while managing to cover all Clemson games for the Columbia Record. This is the way I remember things in 1958.

The stars shone on Clemson’s 1958 football team, which, despite a couple of glitches along the way, completed Frank Howard’s longtime dream of playing and/or coaching in all the major bowls. On January 1, 1959, top-ranked and undefeated Louisiana State edged #12 Clemson 7-0 in the 25th-annual Sugar Bowl to win the national title.

Membership in the fledging ACC required Clemson to host Virginia in the opener, bypassing Presbyterian for the first time in 29 years. All-ACC quarterback Harvey White and his starting 11 watched in the third and fourth quarters as 18-year-old backup quarterback Lowndes Shingler and his second unit overcame 7-6 and 15-14 deficits for a 20-15 win.

It was more of the same a week later when Howard coached his 100th victory in besting North Carolina’s Jim Tatum 26-21 thanks to Usry’s touchdown in the final three minutes. Usry had scored a go-ahead touchdown in the second quarter.

White’s unit scored on defense when Jim Padgett returned a blocked punt by Jim Payne 28 yards. Between them, White and Shingler completed 9-14 passes for 110 yards. Cline rushed for 67 yards and a third-quarter score as well.

At Maryland, the #10 Tigers outplayed the home team in virtually every category…but not by much. The result was an 8-0 win on White’s 50-yard scoring pass to Wyatt Cox in the third quarter. Usry’s 66 rushing yards and 26 receiving yards along with White’s 89 passing yards led Clemson.

Elevated to #8 in the AP rankings, Clemson took its come-from-behind play to the ultimate in Nashville with a 12-7 win over Vanderbilt. White added AP Back-of-the-Week honors to his résumé with two fourth-quarter touchdowns, including the winning score with five seconds left on the clock.

White and his starting unit played the final quarter without substitution, moving the ball 76 yards on 13 plays en route to the first score, and then 70 yards on 16 plays for the game-winner after forcing a punt between touchdowns. White rushed for 105 yards and completed 8-12 passes for 60 yards. Fullback Rudy Hayes rushed for 99 yards and Usry added 75 to lead the Tiger offense.

A midseason lapse followed that dropped Clemson out of the nation’s top 20, as the Tigers were believed to be out of bowl contention. In what would be the next-to-last “Big Thursday” with South Carolina, the Tigers fell 26-6 to a fired-up Gamecock squad that was led by King Dixon and Alex Hawkins.

This was followed by another come-from-behind 14-12 victory at home against Wake Forest and a 13-0 loss to a mediocre Georgia Tech team in Atlanta. Yellow Jacket Backfield Coach Carl Wise had helped recruit many of the Tigers while at Clemson in 1955 and 1956.

How do you beef up a 5-2 record against non-ranked opponents in mid-November when remaining foes were N.C. State and Furman along with unranked Boston College? That was the question.

First, the Tigers defeated the Wolfpack 13-6 and claimed the ACC Championship with a 5-1 record. It was Clemson’s second title in three years. (Yes, the Gamecocks had beaten Clemson, but they did not finish strong, with losses to North Carolina, Maryland, and Army.)

The ACC’s five-year (1953-57) pact with the Orange Bowl that matched its champion against the Big Eight top team had ended. However, publicity attached to winning the ACC crown helped lift the Tigers to #16 in the weekly AP poll. Usry and Bobby Morgan both scored fourth-quarter touchdowns against the Wolfpack. Mathis led the team in rushing with 75 yards on 13 carries as well.

Second, Clemson dominated a Boston College team that had played well in compiling a 6-2 record. The Tigers soundly defeated the Eagles 34-12, an impressive performance for Howard’s team in front of scouts from the Gator Bowl and Sugar Bowl. Each wanted the best team available from the South, and with the Tigers’ win, they moved up to #12 in the AP poll. Auburn was undefeated at the time but on probation, so the ACC Tigers were in the mix for the Sugar Bowl.

Clemson then closed the season with a 36-19 win over Furman after gaining a 30-0 lead at halftime. That performance in the second half nearly spoiled Howard’s “sweet tooth,” but the Tigers were moving on offense. Clemson’s 83 points in the final three games almost matched its 90 that were tallied in its first seven games.

The protests were loud in many quarters when Clemson was extended an invitation to the Sugar Bowl. This all helped motivate Howard’s Tigers in their preparations for top-ranked Louisiana State.

The SEC Tigers were heavily favored, but the outcome was in doubt until the final horn. The hoopla surrounding Head Coach Paul Dietzel’s SEC champions (his three distinct teams, including his “Chinese Bandits” on defense, and Heisman Trophy winner Billy Cannon) helped make the Silver Anniversary Sugar Bowl exciting. The only score of the game came on Cannon’s nine-yard touchdown catch in the third quarter. The play came after a Clemson fumble at its own 11.

While Howard’s “taste of sugar” did not include a victory as had been the case in the other four bowls, his team’s fine play provided him with great memories throughout the remainder of his life. It was an outstanding season for Clemson, one that gained respect for Howard and his program nationwide.

Brent Breedin served as Clemson Sports Information Director from 1952-55. He is now semi-retired and living in Columbia, SC.