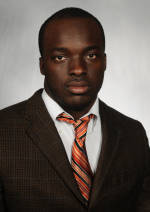 Growing up in the small city of Bamberg, SC, where high school football is a town tradition and a necessity for local families to attend, leads to a fundamental recipe for competition and talent. This talent comes in the form of Ricky Sapp.

Sapp has been a football standout from the age of 10, when he first suited up to play recreational football. He already had the height, build, and natural talent when competing against kids his own age.

“I was always noticeably bigger than my teammates in little league ball,” Sapp remembered. “But I started out at running back because of my speed. I didn’t transition to defense until I played in high school, and I ended up enjoying playing defensive end.”

Locals of Bamberg got to witness the potential of a budding star defensive end when Sapp suited up in red and black to play for the Bamberg-Ehrhardt High School Red Raiders. And amazed the fans were when they saw their local town hero emerge to become a nationally-recognized football standout.

“On Friday nights, everyone in town attended our high school games,” he recalled. “It was unusual not to attend games, and being in that atmosphere where football is prominent gave me the means to understand how much I can affect my team and hometown.”

Sapp was a First-Team USA Today All-American at Bamberg-Ehrhardt High, making him the first Tiger defensive lineman to achieve that recognition since 1989. He also was selected to play in the Shrine Bowl and the U.S. Army All-American game that was televised nationally by NBC.

Sapp also shined off the gridiron. He was a track and basketball standout, making him a triple-threat athlete. He was a three-year state regional champion in the 100m, 200m, and 4x100m relay. He is very quick off his feet and explosive in game situations, which he credits to his track training. He was also a two-year starter and an all-region pick twice on the hardwood.

Sapp’s talents did not go unnoticed, as many schools came knocking on his door. He received offers from Clemson, Florida State, Georgia, N.C. State, Oklahoma, South Carolina, and Virginia Tech. After weighing his options, he chose to suit up for the Tigers.

“I chose Clemson over the other schools because Clemson has an electrifying football atmosphere,” he exclaimed. “The fan base is great here, and I felt that I could get a great education and play for a football program with a thriving tradition.

“I also enjoy the small-town atmosphere, because I knew I could focus on school and football without any distractions. Nothing compares to playing in Death Valley on a Saturday, with thousands of fans cheering you on.”

“I looked up to Gaines when we played together during my freshman year. He played with so much intensity and passion, and I always said to myself that I want to be an impact player like he was.”

In Sapp’s freshman season (2006), he was second on the team in sacks (4) despite playing behind Adams. He ended the N.C. State game when he had an 11-yard sack on the last play, protecting the Tigers’ 26-20 victory. He finished the year with 20 tackles and six tackles for loss, and he was an honorable mention freshman All-American by Scout.com.

As a starting bandit end for the Tiger defense in his sophomore season, Sapp was ready to step into the limelight and show that he could be an impact player. He registered 52 tackles, second-most among Clemson defensive linemen. He also added 10 tackles for loss, five sacks, and 22 quarterback pressures. He totaled the most quarterback pressures on the team due to his speed and quickness in rushing the passer. He has become a player that all opposing offenses account for on every snap.

“You get this adrenaline rush when you know that you have the ability to sack the opposing quarterback,” said Sapp, who wears #7. “Those moments fuel our defense, because we know we can’t let them get into the end zone.”

That same year, Sapp received defensive player-of-the-game honors by the coaches twice. He was also the team’s leading tackler against rival South Carolina with seven stops, a game Clemson won 23-21 on the last play of the game.

During his junior season, he was joined with fellow Bamberg-Ehrhardt High standout Da’Quan Bowers, who also plays defensive end for the Tigers. “I was excited when Da’Quan signed. He is like a brother to me. We’ve known each other for so long that we can help each other out. It’s like having family out there on the field.”

Bowers echoed similar sentiments. “Rick is like my older brother. He has helped me transition from high school football to college. He has made the transition smoother, showing me the `ins and outs’ of college football. I look up to him in a sense, and he pushes me to play hard every game so that I can reach my potential.”

The duo has been good for each other in every phase of the game and off the field as well. Both made the academic honor roll during the spring semester.

The Sapp and Bowers duo is a dream scenario for the Tigers at the defensive end position. This tandem, known as the “Bamberg Bookends,” is a dominating force that can make any offensive coordinator in the nation worried. They give the Tigers one of the most imposing defensive end combinations anywhere in the country.

In the beginning of the 2008 season, Sapp was sidelined with a knee injury against Alabama in the season-opener after playing just 13 snaps. He missed the game against The Citadel while recovering from the knee strain. Just as he was getting his momentum back, he suffered a season-ending torn ACL in the 10th game of the season at Virginia.

“Last year was probably my most stressful season,” admitted Sapp. “It was really frustrating at times because of the injuries. Once I found out that I had torn my ACL, I was at a loss for words. Knowing that my season was over and the fact that I couldn’t help out the team in the remaining games was very hard for me to cope with. I just focused on my recovery, because I wanted to be ready physically and mentally for the 2009 season-opener against Middle Tennessee.”

And prepared he was. Sapp had three tackles, including one tackle for loss, and two quarterback pressures to start out the 2009 season with a victory over Middle Tennessee. The defense held the Blue Raider offense to just one touchdown. Five days later at #13 Georgia Tech, he had nine tackles and a team-high two tackles for loss in an inspired effort.

“I plan to take each game one at a time and get better as the season goes on,” said Sapp. “As a team, our regular-season goal is to play in the ACC Championship game. If that happens, then that would be a great way to cap my career at Clemson.”

Once his career in Tigertown comes to an end, Sapp plans on receiving his degree in sociology and entering the NFL draft in hopes of playing professional football. If that path does not pan out, he hopes to pursue a career in coaching.

Sapp has been a leader, a playmaker, and a core component of Clemson’s stout defensive line for the past four years. He came from a small town but has since made his name known nationally as one of the nation’s best defensive ends. One word can sum up this small-town hero…accomplished.

Brittney Earle, a senior from Easley, SC, is a student assistant in the Clemson Sports Information Office.