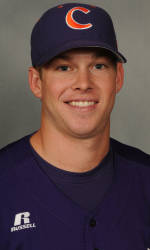 Omaha! When anyone mentions the Clemson baseball program, it is usually one of the first words that comes to mind. In fact, it is etched on the back of all the players’ hats. And once again, it is at the forefront of senior infielder Mike Freeman’s mind going into the 2010 season. For Freeman, baseball has been a part of his entire life.

“I wanted to play like my brothers did, so when I was four, my parents created a tee-ball league so I could start playing,” recalled Freeman.

As he got older, Freeman began playing more and more baseball, including on travel teams, and attended baseball showcases. While in high school, Freeman had the opportunity to compete in several all-star games. He played in the state of Florida All-Star game as well as the Central Florida All-Star game, where he was the defensive MVP.

After he was named a state all-star, Freeman was drafted by the San Diego Padres in the 41st round. Instead, he chose to attend college and let the pros wait.

Freeman spent his freshman season at Georgia. In 48 games (40 starts), he hit .237 with four doubles and eight RBIs. After the season, he played for Keene in the New England Collegiate Baseball League. Freeman’s teammates with the Swamp Bats included former Tigers Ben Paulsen and Matt Vaughn.

Hearing both Tigers talk about the Clemson program, Freeman became interested. After acquiring more information and talking with his parents and coaches, he decided to transfer to Clemson.

Freeman made an immediate impact with the Tigers in 2008. In 54 games (52 starts), #5 hit a team-best .332 with 46 runs, eight doubles, one homer, 19 RBIs, and a .401 on-base percentage. Among the highlights for Freeman were a string of five-straight, two-hit games in May and a career game in a victory over UNC Greensboro, in which he was 3-for-4 with a grand slam (also his first career home run), two runs, five RBIs, and a stolen base.

Following the season, Freeman was invited to play in the prestigious Cape Cod League. He played 44 games and hit .274 with the Brewster Whitecaps. He also received the team’s Citizenship Award. Looking back, he has fond memories of his time in summer ball.

“It was great because you meet so many players from all over the country that otherwise you would never be able to meet,” stated Freeman. “It was a great experience to play against the best players in the country and hold your own against them.”

The Orlando, FL native excelled during the 2009 postseason. In 10 games, he led the team with a .400 batting average and was named to the Clemson Regional All-Tournament team while going 11-for-22 (.500) with seven RBIs and six runs in the five games. It also provided Freeman with his most memorable game at Clemson in the regional championship game against Oklahoma State.

“It was awesome to watch our team fight back and to see Kyle Parker come off the bench and get such a clutch hit,” he said. “To be a part of the sprint to the `Cheap Seats’ is something I will never forget.”

After being drafted again following the 2009 season, Freeman once again put that part of his career on hold to come back and help get Clemson back to Omaha. This season, Freeman hopes to continue to be a consistent leader of the team.

“We want to be the best team in the ACC and have an opportunity to play at home in a regional and super regional, where we can win in front of our fans to go to Omaha,” said Freeman when asked about some goals for the season.

Freeman has had many people impact and influence his baseball career. His parents, brothers, and grandmother have always had the biggest influence on him. Head Coach Jack Leggett has also made a huge impact on his career.

“There is not another coach in the country that has his passion or cares more about his players than Coach Leggett. No one works as hard as he does to put his players in the best position to win.”

Freeman, a two-time All-ACC Academic team member and a member of the All-SEC Academic team while at Georgia, will graduate in May with a degree in financial management. He hopes to continue playing baseball for as long as he can.

Trey McCurry, a second-year graduate student from Honea Path, SC, is a graduate assistant in the Clemson Sports Information Office.